Update 4: Just hours after the shooting began, it looks like the final tallies are in.

Reuters reports that six people have been killed, including the two shooters: (those killed include one police officer, three people who were inside the JC Kosher Supermarket when the shooting began, and both of the suspected shooters).

Jersey City Mayor Steven Fulop told a news conference that there were multiple people deceased inside the store, where suspects reportedly had holed up and exchanged gunfire with law enforcement in a standoff that lasted for hours.

The New York Times said the dead included a police officer, three victims who were in the store and two suspected gunmen.

Local media also reported the shooting unfolded at or near the JC Kosher Supermarket, though a city official told reporters there was no evidence the bloodshed was terror-related.

Two more officers and another bystander were wounded during the hours-long shootoff between police, federal agents and the shooters, who holed themselves up inside the supermarket for a period.

Though it started at a kosher supermarket, police and Jersey City’s mayor said the attack wasn’t a deliberate act of terror against Jews.

Update 3: Both gunmen are now reportedly down. So far, casualties – other than the shooters – include only one cop, though two others were shot.

Rabbi Moshe Shapiro, teh Chabad Chief Rabbi of New Jersey, was apparently in the grocery store when one of the suspects walked in and started firing.

Update 2: President Trump was briefed on the Jersey City shooting at the White House.

Here’s more from a liquor store employee who heard the shootout, according to NBC News.

SWAT teams with Jersey City and state police were among those responding Federal agents from the Bureau of Alcohol, Tobacco, Firearms and Explosives in Newark and the FBI were also on the scene.

“I can hear the gunshots. It’s like firecrackers going off,” said Andy Patel, who works at a liquor store about three blocks away from the scene.

“They were shooting like crazy about an hour ago. Then it stopped for like 20 or 30 minutes. The cops were clearing everyone off the streets.”

Some reports have claimed that three cops have been shot, along with two civilians.

There appear to be two separate scenes. One around the Bay View Cemetery, and another closer to New Jersey City University. All schools in the city have been closed. According to ABC, the scene is still “very active.” One officer was reportedly shot in the head, and is in critical condition.

Follow along with a live feed of ABC’s reporting below:

Yet another stunning active-shooter incident is unfolding Tuesday afternoon in New Jersey City, as two armed suspects engaged in a firefight with a group of Jersey City police officers, with some media reports claiming that the attackers escaped to nearby rooftops, where at least one of them continued firing on the street below with what were described as “long guns.” 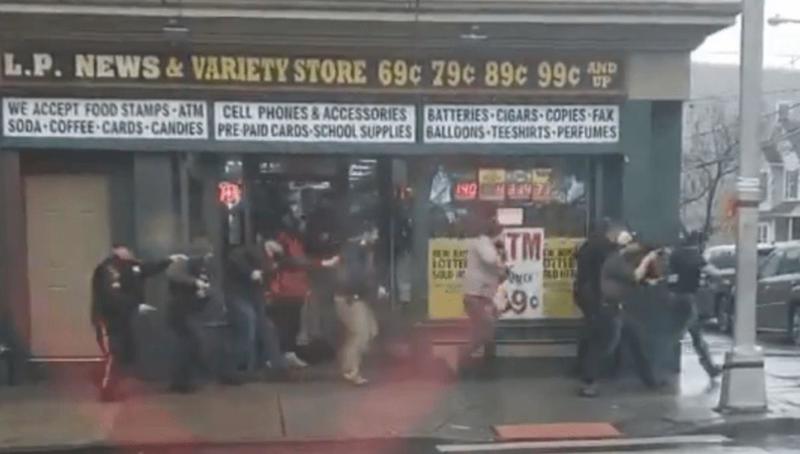 Loud gunshots can be heard in videos posted to social media. At the end of the video below, a man can be heard shouting “they took him out”, though more gunshots followed.

Y’all pray for my city #JerseyCity there is a active shooter and one cop got hit… pic.twitter.com/tO7k2cJgjJ

Other videos showed ambulances responding to the scene.

Another video shows officers marching up the street warning pedestrians to take cover.

Police said at least one gunman is “shooting at anyone they see on the street,” according to NJ.com. The shooting reportedly started in a cemetery before the shooter fled into a nearby bodega, according to ABC New York.   Another report claimed the two shooters targeted a Jewish grocery store and targets on the street outside, raising the possibility that this could be another anti-semitic attack. ABC said the shooting began at Bay View Cemetery, though there don’t appear to be any kosher groceries close enough to the cemetery.

Police searching that cemetery have reportedly recovered a wounded officer’s vehicle and radio. Surveillance footage has also been recovered showing one of the suspects entering a bodega after exiting from a van on the street.

No deaths have been reported yet, but at least one cop and one civilian have been shot. One of the gunmen has fired at a nearby school, prompting authorities to put all schools in the area on lock-down, and federal agencies, including the ATF, are on the scene near Martin Luther King Drive, where the shooting is taking place. That thoroughfare has been closed in both directions because of the shooting. Jersey transit has suspended rail and bus service on the west side of Jersey City.

The Twitter account for the New Jersey Police PBA asked that readers keep the Jersey City officers in their prayers.

We need a lot of prayers right now for Jersey City officers. Keep all those involved in your thoughts.

Some reports claim that one of the two shooters is a woman, but we haven’t been able to confirm that. There have also been unconfirmed reports of an IED in a store.