Two weeks ago we pointed out that even as (or rather, because) stocks hit daily all time highs, we now have mass public unrest (on and off) in: France, Spain, Algeria; Iraq: Lebanon; Egypt; Russia; Hong Kong; Venezuela; Chile; Ecuador; and Bolivia.

The is a simple reason for this social anger: an unprecedented wealth and income divide as a result of constant central bank interventions in capital markets, which have made upward social mobility virtually impossible and stagnant wage growth the norm, and nowhere more so than in the US, where as Bloomberg reports citing the latest Fed data, “one-percenters” now hold almost as much wealth as the middle- and upper-middle classes combined, as a result of the relentless ascent in stocks which added another $1 trillion in market value in just the past week, bringing the total to $82.7 trillion. 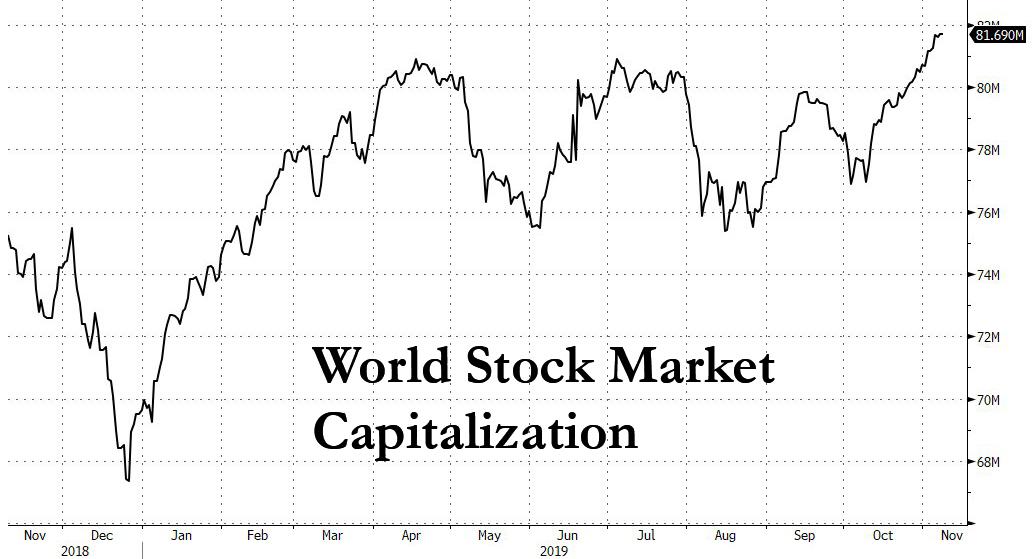 Here are the facts: as the NBER recently reported, in 2016 the richest one percent of households held more than half of all outstanding stock, financial securities, trust equity, and business equity, and 40 percent of non-home real estate. The top 10 percent of families as a group directly owned over 93% of all stock and mutual fund ownership.

Visit our store now before the sale ends!
Alex Jones and Robert Barnes sift through the Dems’ open attempt to seize control of America by force.
By the way, upgrade your smile with the new SuperSilver Whitening Toothpaste that’s on sale now!

Moreover, despite the fact that almost half of all households owned stock shares either directly or indirectly through mutual funds, trusts, or various pension accounts, the richest 10 percent of households controlled 84 percent of the total value of these stocks, though less than its 93 percent share of directly owned stocks and mutual funds.

And with the stock market soaring to new highs, it will hardly be a surprise that the “top 1%” of American households have enjoyed huge returns in the stock market in the past decade, ironically enough using data from the Federal Reserve, which is directly responsible for this unprecedented wealth distribution. And, as Bloomberg notes, “those fat portfolios have America’s elite gobbling up an ever-bigger piece of the pie.”

In specific terms, this means that the very richest 1% had assets of about $35.4 trillion in the second quarter, or just shy of the $36.9 trillion held by the tens of millions of people who make up the 50th percentile to the 90th percentile of Americans — much of the middle and upper-middle classes.

Commenting on this unprecedented wealth divergence that was last observed a few years before World War II, Lakeview Capital’s chief market strategist Stephen Colavito said that people can’t get much of a return on certificates of deposits and other passive investments, “so they’ve pumped money into stocks and propped up the market overall.”

Actually, the one who is “propping up the market overall” is the Fed, which following a mini repo market crisis sparked by JPMorgan launched “NOT QE”, and injected $280 billion in fresh liquidity in just the past two months, pushing the Fed’s balance sheet above $4 trillion for the first time since February.

At this point, wealth becomes a feedback loop: “The wealthier that the wealthy get, the more opportunity they have,” Colavito said.

It’s also why angry populist movements have become an ever more powerful force on both the left and right, demanding either wealth redistribution, higher taxation of outright punishment of those billionaires who have benefited from the Fed’s artificial levitation of the stock market. In many countries around the globe, this anger has spilled over on the streets as millions protest for social change, on many occasions with violence.

Their anger is only set to grow, because as Bloomberg notes it may not be long before “1-percenters” surpass the middle and upper-middle classes combined. Household wealth in the upper-most bracket grew by $650 billion in the second quarter of 2019, rising to $35.5 trillion, while Americans in the 50th to 90th percentiles saw a $210 billion gain.

One step below the top 1%, those Americans in 90th to 99th percentiles, still control the biggest share of wealth, with $42.6 trillion in assets.

What about the bottom end of US society? Well, if the super rich own almost all stocks, the “bottom 90%”, i.e., 90% of the entire US population, owns the vast majority of debt, some 72.4% of the total pile.

There is one final twist: the wealthy vs poor conflict is increasingly being drawn along age groups: Baby Boomers born between the end of the Second World War and 1964 currently hold wealth that was 11 times higher than that of millennials as of the second quarter.

So how are millennials protesting this unfair age wealth divide? Are they rioting, becoming political activists and voting in droves, unionizing or participating in mass labor strikes? None of the above: after all, even refusing to work is apparently too much work; instead America’s youth has flooded social media with the pinnacle of passive-aggressive revolt in the form of the now ubiquitous “OK Boomer.”

We doubt the Boomers are losing too much sleep over this rebellion by the avocado toast generation.