A surgeon known to promote gun control was accused of perpetrating a fake crime against himself. 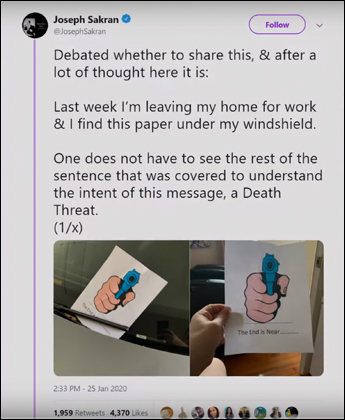 In a now-deleted tweet uploaded Saturday, leftist Johns Hopkins trauma surgeon Joseph Sakran claimed he found a death threat on his car window as he was leaving his house.

“Debated whether to share this, & after a lot of thought here it is,” Sakran wrote.

“Last week I’m leaving my home for work & I find this paper under my windshield. One does not have to see the rest of the sentence that was covered to understand the intent of this message, a Death Threat.”

The sheet paper, which Sakran claims showed up on his car window at his home in Baltimore on January 20 – the same day as the gun rights rally in Virginia – showed a hand holding a gun, with words reading, “The End is Near….”

Sakran’s photos were immediately scrutinized by internet users, who came to the conclusion Sakran had staged the crime.

Why would you put this on your car? Oh right. For clout

Yeah, and they said that they’ve caught the men who did it: pic.twitter.com/dEUxiNYcok

How come such a disproportionate number of these “events” seem to happen to outspoken activists?

Guess he is wanting to be the Jessie Smollett of 2020?

Some pointed out wrinkles on the paper were different in the photos, with the one on the car window having more wrinkles than in another photo where Sakran appears to be holding the paper inside his home, indicating they were taken at different times.

Because the wrinkles in the paper.

The photo on the right has no wrinkles whereas the photo on the left, does, once the paper was placed under the wiper blade. pic.twitter.com/k0SRpDLqnC

I was concerned when I saw this post and then noticed the photo from inside the house was quite smooth and lacked the obvious wrinkles seen on the pic that I assume is as the note was found, inside what looks to be residential garage. Maybe there’s a logical explanation. pic.twitter.com/LWBIURv1ef

In looking at the photos again it looks like there is also a smudge and more wrinkles on the first one that are absent from the second one. Really curious to know how that happened. pic.twitter.com/mXtEwl3BdO

Others pointed out a reflection in the photo with the note on the car window shows an attic door on the ceiling, suggesting the photo was taken inside of a garage.

How did these people get in your garage? pic.twitter.com/F4dXkJ7Bff

not to mention the fact that you’re in your garage. pic.twitter.com/Sa4k7JIYAu

No wonder the leading cause of death is medical negligence 🙄 pic.twitter.com/DOpU6YwuUH

One journalist with The Post Millenial highlighted on Sunday the fact that color printers leave MIC (Machine Identification Code) marks on printer paper, information which could help police figure out who left the note.

However, in an interview with The Baltimore Sun, Sakran claimed “law enforcement” had advised him to delete the tweet,” though The Sun notes he did not say which agency he spoke to. He did not mention whether they asked to see the paper.

He also told The Sun he found the threat while “cleaning out his car,” raising further questions:

Sakran, 42, said he recalls grabbing what he thought was a flier off his windshield on the morning of Jan. 21 as he made his way into work at the U.S. Capitol, where he is serving as a Robert Wood Johnson Foundation health policy fellow. Sakran took a sabbatical from his position as director of emergency general surgery at Johns Hopkins Hospital to take the fellowship.

He said he took no notice of what was on the paper that morning, distracted by thoughts about his new job. But days later, as he was cleaning out his car, he took a closer look and realized what it was with a jolt, he said.

The Post Millenial’s Anna Slatz said she contacted the local police department where Sakran lives, but they said he had not filed a police report, nor had they asked him to delete the tweet.

The Fairfax County PD is the jurisdiction which surrounds Fairfax station, where Sakran’s home is located, and where the death threat was allegedly discovered.

This story continues to develop and information may change.

“That’s just not something we do,” a Fairfax County police lieutenant told Slatz.

Just as he deleted the tweet, however, his story began to receive attention from fellow medical professionals and gun control advocates, who voiced their support for him.

We are with you @JosephSakran.

.@JosephSakran has fought for Peace since he was shot in the throat and nearly died when he was 17.

We are fighting for an America where people can advocate for peace without violent intimidation.

I don’t care if you agree with me or not, threatening to kill people is not ok. https://t.co/YaOWfFT5qd

Sakran is behind the pro-gun control @ThisIsOurLane handle on Twitter, which was created in response to a viral tweet from the NRA.

The trauma surgeon also founded the group “Doctors for Hillary” during the 2016 presidential campaign, which also promoted gun control.

He has also testified before Congress on gun violence and the dire need to restrict the Second Amendment.