Pro-life advertisements on buses in an Australian city were quickly removed and banned at the command of an MP who received a complaint on Facebook.

The banners simply read, “A heart beats at four weeks,” along with an image of a pregnant woman’s stomach and a web address for NotBornYet.com, a resource center for those “facing an unplanned or crisis pregnancy.”

MP Andrew Constance, who serves as Minister for Transport for New South Wales, received a complaint from a constituent, to whom he replied and thanked, as Caldron Pool reports. 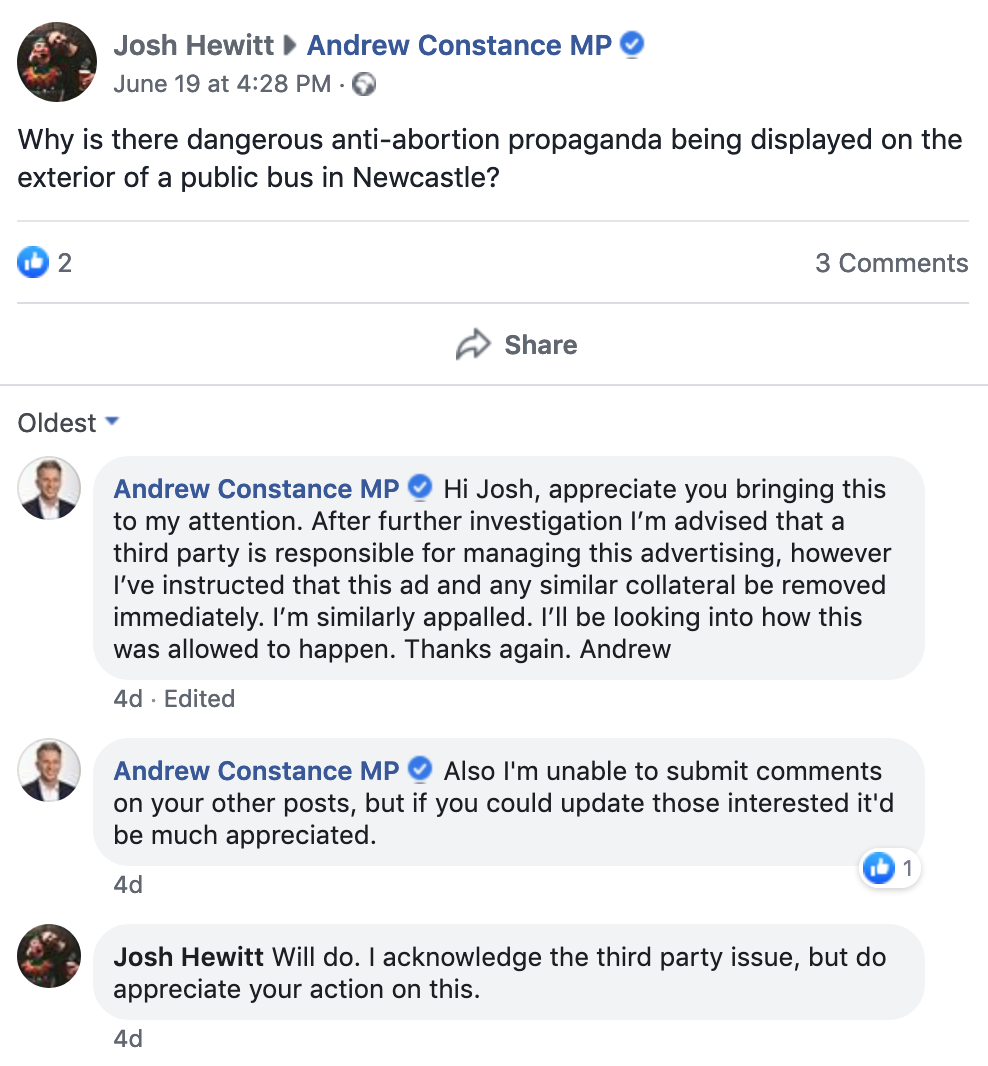 “Why is there dangerous anti-abortion propaganda being displayed on the exterior of a public bus in Newcastle?” the user wrote.

“Hi Josh, appreciate you bringing this to my attention,” Constance replied. “After further investigation I’m advised that a third party is responsible for managing this advertising, however I’ve instructed that this ad and any similar collateral be removed immediately. I’m similarly appalled. I’ll be looking into how this was allowed to happen. Thanks again. Andrew”

The constituent was contacted by the Newcastle Herald for comment on what motivated his complaint.

“Being who I am as a man, I can never truly imagine what it would be like to see that sort of thing rolling around the town on a bus. It’s a guilt driven directive on what to do with their body,” he told the paper.

Emily’s Voice voiced their shock and frustration about being banned in a seemingly targeted manner.

Govt vetoes “appalling” bus ad for @EmilysVoice1 but allows other ads for pregnancy support and those advising women not to drink during pregnancy @AndrewConstance #abortion #pregnancy #women https://t.co/1adehrwbX4

“Apparently it’s impolite to encourage women to continue an unexpected pregnancy by informing them their babies have a tiny heartbeat,” said CEO Paul O’Rourke. “We are seeking to restart and reshape the life conversation in a sensible, sensitive way free of guilt and condemnation so women make an informed choice. We are pro-women and for-children.”

“The ads promote notbornyet.com containing relevant and timely information for women experiencing an unplanned or crisis pregnancy, including where to get practical, free support.”

“Most Australians are unaware there are an estimated 70,000 abortions, 95 percent of which are performed on healthy women carrying healthy children,” O’Rourke continued. “There are government campaigns to reduce smoking, the road toll, cancer and heart disease. Surely there’s a place to reduce abortion which claims more Aussie lives each year than any other cause?”

A video posted to Twitter reveals the debauchery being pushed on youth as a young boy “twerks” to the enjoyment of gay adults surrounding him.