The BBC has come under fire after multiple DJs aired a song by an ‘Asian’ rapper who brags about pimping “white girls” and using them to sell drugs.

Lyrics in the song include:

“Had them white birds on the side curbs, looking for a dirty Paki or a white nerd.”

“I had a white girl, I used to call a cash machine. I got 20 white girls and they all trap [sell drugs] for me. They’re all in the flats laying on their backs for P [money].”

In response, Chris Tuck, founder of the Survivors of Abuse charity, told the London Times, “I do not think it’s appropriate for any individual or group to promote the exploitation of women of any race.”

The BBC has announced the song will be dropped from rotation.

“A version of the track which did not meet our editorial standards was played on Asian Network produced shows, in error,” the network said in a statement. “The song will not be played on any future shows.”

Harami has taken note of the publicity his song has received as a result of the controversy, posting screenshots of articles on his Instagram page.

“Peak times,” Harami wrote next to a Daily Mail headline. 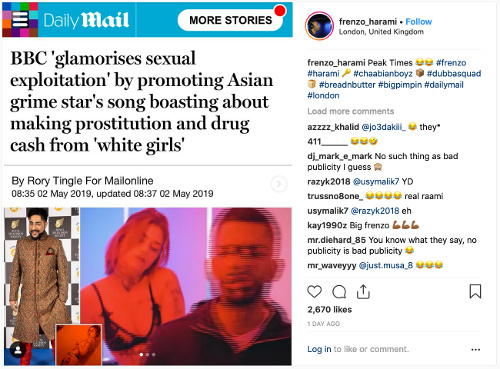 In recent years, the U.K. has been rocked by revelations that ‘grooming gangs’ have been operating in towns and cities across country for decades, with thousands of white British girls being drugged, trafficked, and raped by sexual predators, the vast majority of whom are Asian men.

The most notorious case emerged from Rotherham, where the lives of over 1,400 girls were systematically destroyed by gangs of primarily Pakistani men, including one victim who testified that she had been raped by “at least 100 Asian men” by the time she was 16-years-old.

Halima Aden is featured in the latest Sports Illustrated Swimsuit Edition wearing a “burkini” – highlighting the fact that Sharia Law is now being normalized in the West.