Binge drinking amongst American women without children has doubled in just over a decade, proving that the satirical ‘wine aunt’ meme is actually true.

A study by Columbia University found that, “More than four in ten (42 percent) childless 30- to 44-year-olds were having five or more drinks on any given occasion last year – compared to a fifth (21 percent) in 2006,” reports the Daily Mail.

Another study from last year showed that white adult women over the age of 45 were more likely to take antidepressants than younger adults, men and minorities.

The wine aunt is no longer just a meme, it’s a manifestly provable reality. 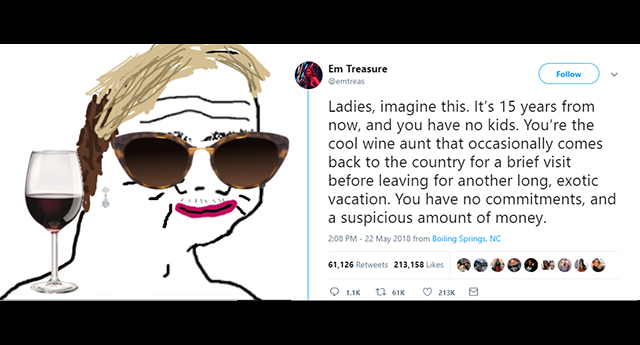 Many women have bought into social engineering propaganda that not having children provides them with freedom and happiness when in reality it only makes them miserable and lonely.

In addition, when these women reach their later years, there will be absolutely nobody to take care of them and many of them will likely die alone.

The freedom to die alone having lived a joyless, barren life of meaningless hedonism.

Meanwhile, as we document in the video below, the epidemic in suicides of white, middle aged working class men in America continues to be ignored by the media.