The official website of the Black Lives Matter organization quietly removed a webpage which radically called on activists to “disrupt the Western-prescribed nuclear family.” 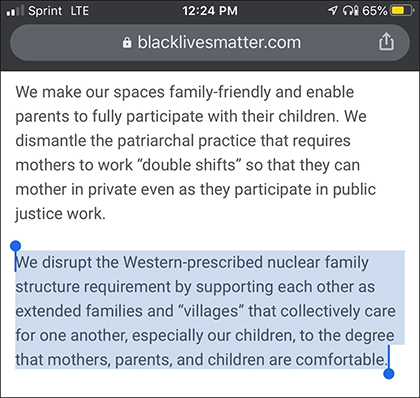 The now-deleted page, titled, “What We Believe,” detailed the organization’s supposed values, among them being to “dismantle cisgender privilege” and “foster a queer-affirming network,” along with breaking up the traditional modern two-parent family structure.

“We disrupt the Western-prescribed nuclear family structure requirement by supporting each other as extended families and ‘villages’ that collectively care for one another, especially our children, to the degree that mothers, parents, and children are comfortable,” the site stated.

On Monday, social media users noticed a link to the page titled, “What We Believe,” no longer existed at BlackLivesMatter.com, and the URL address to the specific page now led to a 404 error page stating “Page not found.”

BLM’s “what we believe” page, calling for the destruction of the nuclear family among many other radical left wing agenda items, has been deleted pic.twitter.com/qCZxUFMZH4

“Sorry, but the page you were trying to view does not exist,” a message at the url now states.

This idea isn’t unique to BLM, of course. “Disrupting” the “nuclear family” is a commonly stated goal among Marxist organizations. Given that BLM’s founders have specifically claimed to be “trained Marxists,” we should not be surprised that the organization’s leadership has embraced a Marxian view of the family.

But where does this hostility toward the family originate? Partly, it comes from the theories of Marx and Engels themselves, and their views that an earlier, matriarchal version of the family rejected private property as an organizing principle of society. It was only later that this older tribal model of the family gave way to the modern “patriarchal” family, which promotes and sustains private property.

[…] In the Marxian view, therefore, the modern nuclear family runs counter to the ancient “communistic” household Engels had earlier described. It is patriarchal and centered on private property.

Harrison analyzes a 60 minutes piece on Hungary’s pro family policies, the complete opposite that we are seeing in other countries in Europe.