A black professor of literature at SUNY Old Westbury wrote of how he feels “happy” seeing white homeless people begging for food.

“White people begging us for food feels like justice,” wrote Nicholas Powers in an article entitled Seeing poor white people makes me happy. “It feels like Afro-Futurism after America falls. It feels like a Black Nationalist wet dream. It has the feels I rarely feel, a hunger for historical vengeance satisfied so well I rub my belly.”

The piece was published by a website called ‘RaceBaitr’ but has since been deleted. 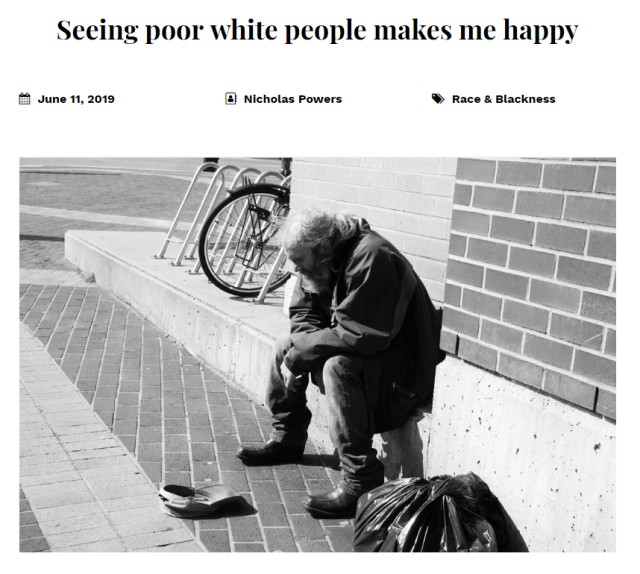 Acknowledging that this isn’t a “good look,” Powers nonetheless denounced Martin Luther King’s message of “show compassion to those who spite you” by asserting, “Go fuck another secretary Martin!”

Claiming that white people are “descendant of murderers who killed our ancestors,” Powers goes on to proclaim, “When a white person begs, maybe a white woman breastfeeding or a young white boy whining like a broken flute, I feel better. Good. It’s not just us. I feel happy. I feel like the scales of justice could shift.”

Powers went on to explain how he enjoys ignoring homeless white people begging for food, writing, “I see in them the history of colonization, slavery and mass incarceration that makes their begging Black people for money ironic—if not insulting. You wasted your whiteness! Why should we give to you?”