The second White House whistleblower in the Democrats’ Ukraine witch hunt is none other than George Soros operative Fiona Hill, Infowars has learned.

Infowars was contacted by sources close to the president confirming our suspicions that Fiona Hill is definitely one of the so-called White House whistleblowers involved in the current Ukraine witch hunt against President Trump.

Infowars first reported that Hill worked as a mole for Soros when Trump confidante Roger Stone broke the bombshell in May 2017, revealing that Hill was serving as Soros’ mole under the supervision of former NSA adviser H.R. McMaster.

The video below shows Trump confidante Roger Stone in July 2017 warning that he was told he would be “targeted for annihilation” by the FBI for exposing the mole.

Stone was raided by the FBI and arrested in January.

Additionally, this bombshell also helps explain why researcher and frequent Infowars guest Ted Malloch was detained by the FBI during the Russia “collusion” witch hunt in 2018.

This is exactly why Google expunged the search results of these original Infowars videos everywhere — they don’t want the American people to know that Hill is a partisan Soros operative working against Trump.

Notice that the original Infowars videos from 2017 have since been removed from YouTube. 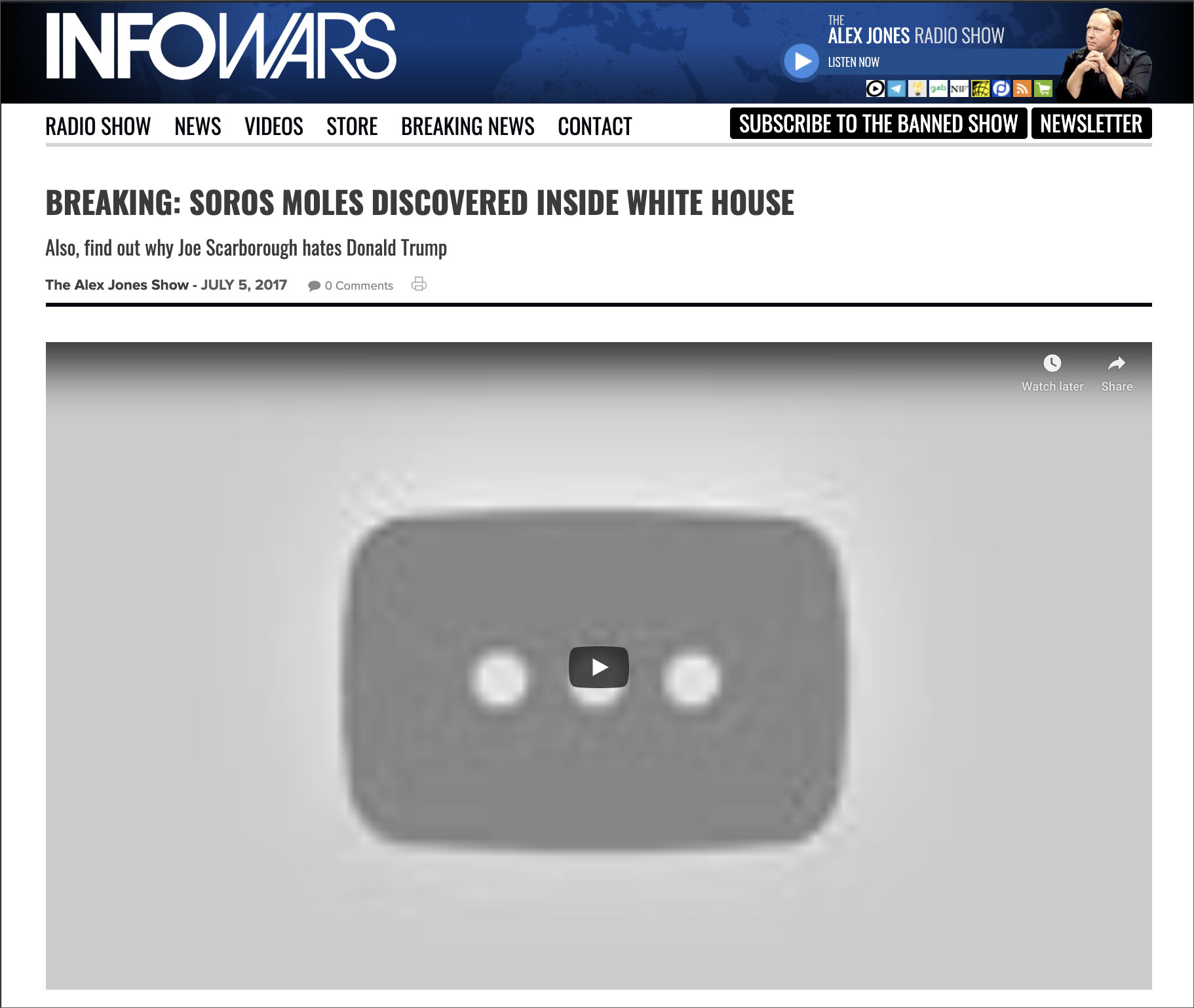 Further research shows that search results for these videos have been de-indexed – where you’re unable to find results using the exact headlines – in YouTube or Google.

But using the Bing search engine, we were able to find these critical videos from patriotic individuals who actually uploaded them. 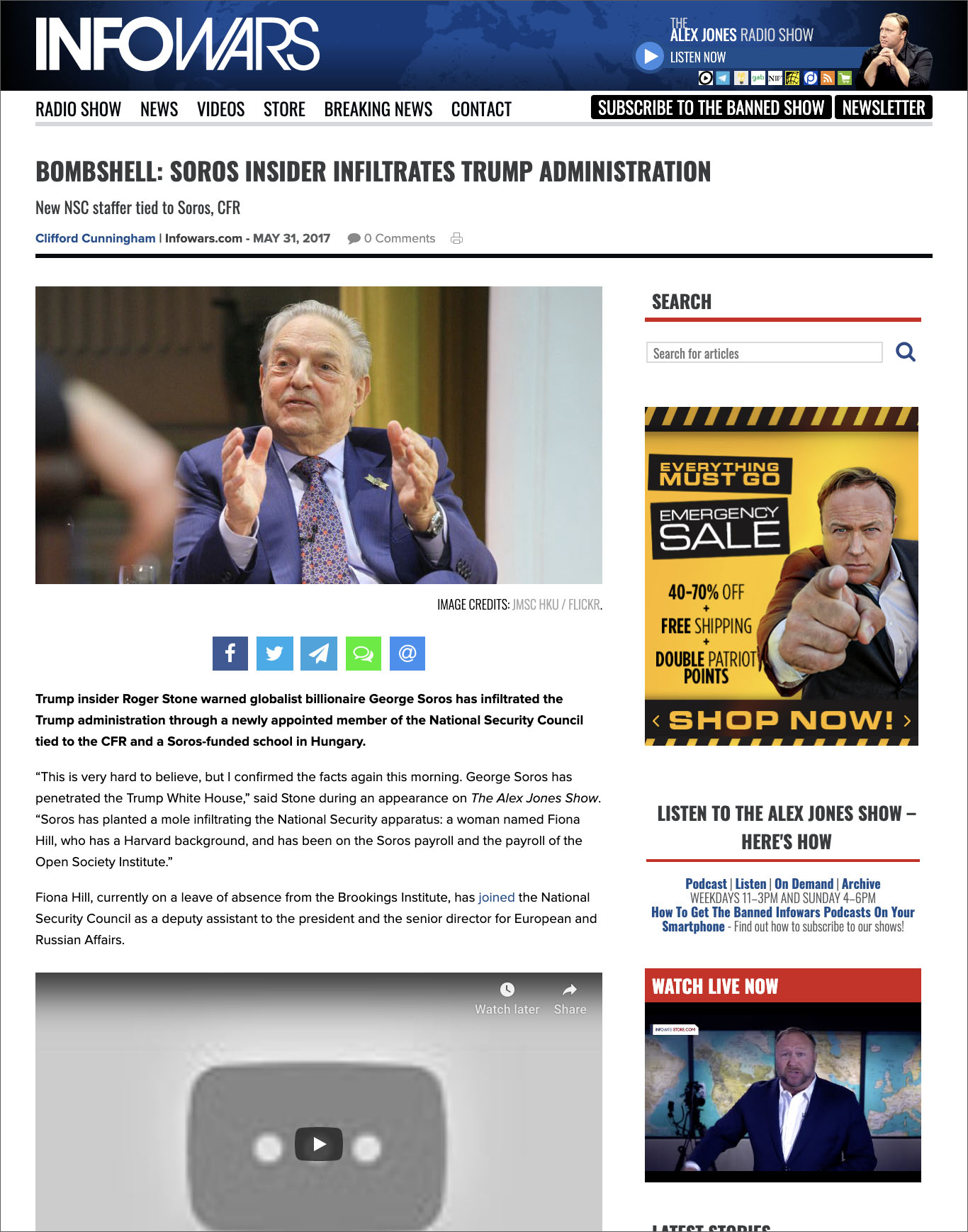 This proves that searching for these critical videos on Google or YouTube is actually physically impossible to find where they are still posted, showing premeditated action by Big Tech to censor these bombshell revelations.

This, along with Stone’s arrest, shows premeditation by Big Tech and the Deep State to punish individuals who expose corruption and prevent the story from spreading.

It also explains why Democrats have been trying to hide the identity of the whistleblowers — because Hill is in fact a partisan political operative and a Soros-backed mole.

Hill, who left the NSC last summer, is set to testify before Congress next week, where she’ll claim that Trump’s lawyer Rudy Giuliani and EU Ambassdaor Gordon Sondland improperly informed Trump about certain matters in Ukraine.

“Hill plans to say that Giuliani and Sondland side-stepped the proper process for accessing Trump on Ukraine issues, the person familiar with her expected testimony said, including circumventing John Bolton, who was Trump’s national security adviser until September,” NBC reported Friday.

You’re probably asking, how is Hill the obvious whistleblower but also testifying before Congress?

“That’s the way these corrupt spy operations work. It’s called parallel construction. What they’re doing is illegal. They’ll be the anonymous tipper themselves or the anonymous whistleblower and then use those protections to keep their anonymity. Then they’ll trigger the fake investigation and then be called as a witness because they’re considered a person of knowledge by the committee run by the corrupt Adam Schiff who helped concoct the entire scheme in the beginning.”

“That’s the big sick joke, is they’re talking about, ‘Oh no! Nobody can see the whistleblower, we’ve got to protect them.’ Because whoever that person is has already been caught lying, as the transcript shows. So they put out the initial lie, and then move on to these witnesses who can then ‘corroborate’ with the whistleblowers.”

Alex Jones analyzes the fallout of Rudy Giuliani publicly announcing that top Dem criminals will be exposed within weeks.