China’s embassy in Denmark is demanding a public apology from a local newspaper for publishing a cartoon of the Chinese flag with its five yellow stars depicted as Coronavirus particles.

The single-panel cartoon that appeared in Monday’s edition of Jyllands-Posten was described as an “insult to China” that “hurt the feelings of the Chinese people.”

“Without any sympathy and empathy, it [the cartoon] has crossed the bottom line of civilized society and the ethical boundary of free speech and offends human conscience,” said the embassy Tuesday. “We express our strong indignation and demand that Jyllands-Posten and Niels Bo Bojesen [the Danish artist of the cartoon] regret their mistake and publicly apologize to the Chinese people.” 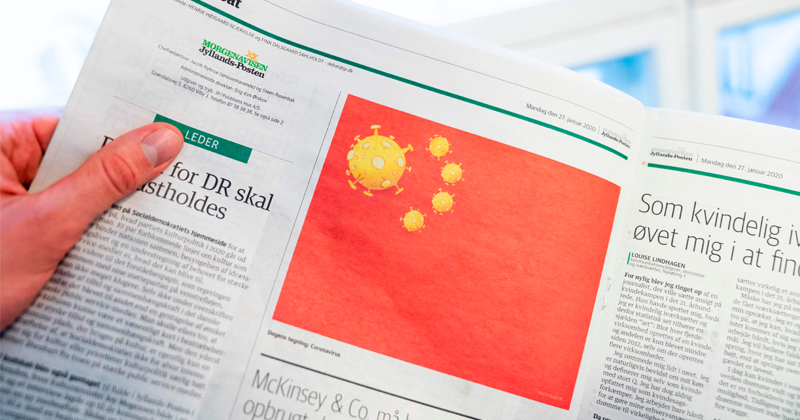 The newspaper’s editor-in-chief Jacob Nybroe refused to apologize, saying the cartoon was not meant as an insult.

“We cannot apologize for something that we don’t believe is wrong,” said Nybroe. “We have no intention of demeaning or mocking the situation in China and we don’t think the drawing does that.”

“Drawing a flag and illustrating the coronavirus very quickly illustrates that they [China, ed.] are battling a virus,” he added. “That’s it.”

Already, Danish politicians from across the spectrum have expressed support of the newspaper while slamming China’s request.

“China’s reaction is a sad repetition of the principle of the Mohammed crisis,” said Conservative Party leader Soren Pape Poulsen. “China should NOT claim an apology for the media’s editorial line. Full support for Jyllands-Posten.”

Poulsen is most-likely recalling when Jyllands-Posten published satirical drawings of the Islamic prophet Mohammad back in 2005 that caused outrage across the Muslim world.

Alex Jones breaks down Bill Gate’s involvement in ‘Pandemic’ and how he is using his tax-free billions to help with the globalist depopulation agenda.