Just hours after China’s retaliatory tariffs on the U.S. officially kicked in at midnight on Saturday in Beijing, affecting more than 2,400 goods that face levies of as much as 25%, compared with the previous charges of 10%, China took its first non-tariff retaliatory step, when it launched an investigation into FedEx for the wrongful delivery of packages, the country’s state-run Xinhua News Agency reported. 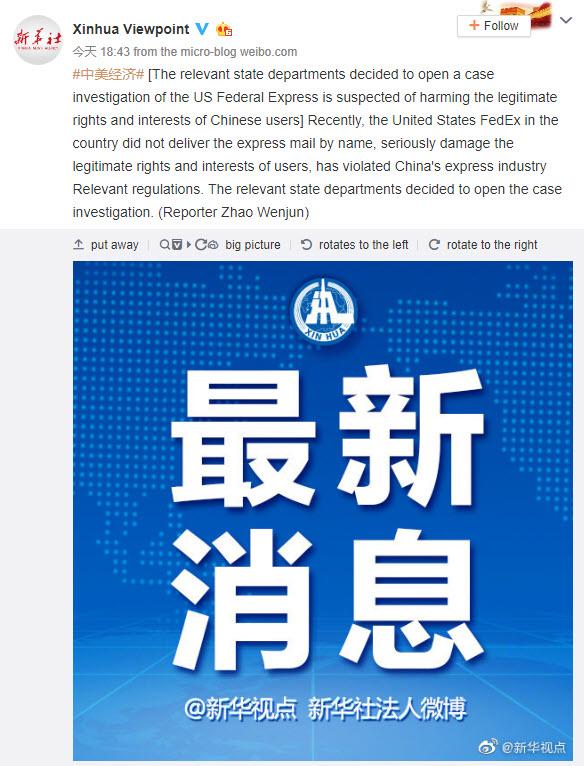 Earlier this week we reported that anticipating a backlash from Chinese officials that could seriously undermine its prospects in one of the world’s largest growth markets, FedEx apologized to Huawei on Wednesday after the global logistics company “accidentally” diverted two packages sent from Japan that had been addressed to Huawei in China.

The packages, which purportedly contained mundane – yet ‘urgent’ – legal documents, had been inexplicably rerouted to FedEx’s US headquarters in Memphis. Two more packages sent from Vietnam were nearly re-routed as well.

Following the mishap, Huawei said it was reviewing its relationship with FedEx, and now Beijing has also gotten involved and in commentary read on its flagship evening news program, the state-run China Central Television said that “now that China has established a list of unreliable entities, the investigation into FedEx will be a warning to other foreign companies and individuals that violate Chinese laws and regulations.”

The Fedex “warning” comes one day after China said it will establish a list of “unreliable” entities that harm the interests of domestic companies, which could affect foreign enterprises as trade tensions escalate.

Based on what I know, FedEx has caused strong suspicion from Chinese side as it diverted several Huawei packages addressed to China to the US and other wrong place. Relevant Chinese authorities will launch investigation on FedEx.

And just so there was no confusion about the intent behind the investigation, Xinhua used two hashtags in the two Weibo posts on the FedEx announcement: #RetaliateAgainstUSTradeBullying and #ChinaUSTrade.

John Cleese hit back at critics who savaged him for a tweet in which he said that London is no longer an English city by tweeting, “I prefer cultures that do not tolerate female genital mutilation.”