DIS shares gave up the day’s gains into the close and into after-hours following reports from a whistleblower that the company had materially overstated revenue for years.

MarketWatch reports that Sandra Kuba, formerly a senior financial analyst in Disney’s revenue-operations department who worked for the company for 18 years, alleges that employees working in the parks-and-resorts business segment systematically overstated revenue by billions of dollars by exploiting weaknesses in the company’s accounting software.

The reaction was swift but not dramatic… 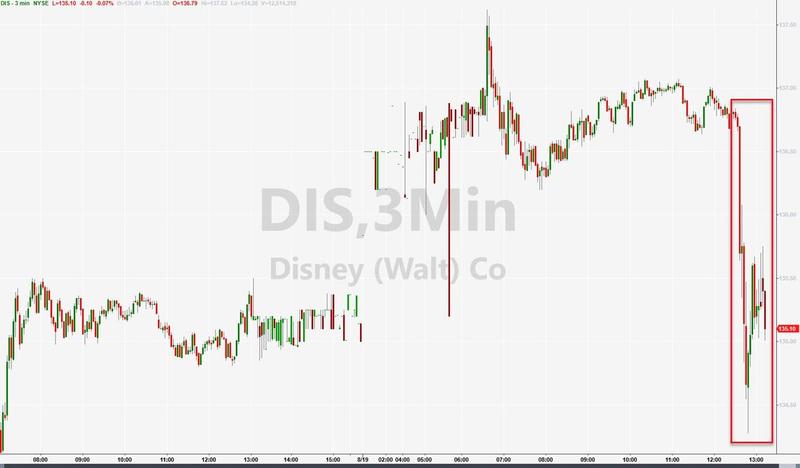 Kuba said she brought her concerns to the SEC in August 2017. She was fired from Disney about a month later.

In October 2017, Kuba filed a whistleblower-retaliation complaint with the Department of Labor’s Occupational Safety and Health Administration. Disney’s response to the department’s whistleblower office investigator’s inquiry said that Kuba’s employment was terminated because “she displayed a pattern of workplace complaints against co-workers without a reasonable basis for doing so, in a manner that was inappropriate, disruptive and in bad faith.”

Kuba has made two additional whistleblower filings since leaving the firm, including one this past June.

According to the report, a spokeswoman for the SEC declined to comment while a Disney spokesperson said the claims had been reviewed and were found to be “utterly without merit.”