Coffee giant Starbucks has designed a Black Lives Matter shirt for employees – the only problem is they’re produced in Haiti by black workers who routinely suffer workers’ rights abuses.

The new design includes an image of protest signs with slogans such as, “No Justice, No Peace,” “Unity!” and, “It’s not a moment, it’s a movement,” a quote from the musical “Hamilton.”

The front of the shirt features the BLM communist fist symbol, complete with fingernail polish, presumably a nod to the Black Trans Lives Matter movement. 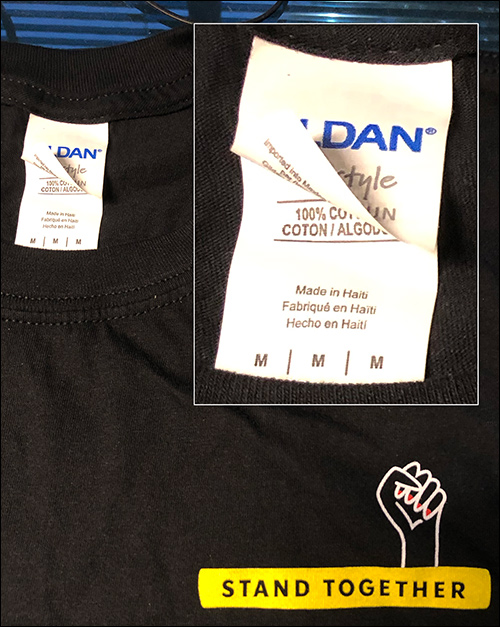 A source inside a Starbucks in Austin, Texas, who confirmed the nationwide rollout of BLM shirts, noticed a tag on the inside of the shirt reads, “Made in Haiti,” a country known to house one of the largest sweatshop populations in the world.

Considering Haiti’s record of abuses, it would be interesting to see if the company is making sure black factory workers are being paid a living wage – but just like the NBA virtue signals for BLM, then supports three million Uyghurs in slave camps in China, don’t hold your breath.

The company’s major virtue signal efforts reached a peak in 2018, when the company forced employees to watch “video after video” of white cops attacking black people, an attempt to atone for two black men being arrested at one of their locations.

The hysteria reached a peak when political activist Hotep Jesus entered a Starbucks and demanded free coffee in return for the company’s racism.

Haitians work for pennies on the dollar inside sweat shops

Starbucks was hailed as progressive for creating the design addressing BLM, however, the clothing manufacturer used to produce the shirt, largely based in Haiti, has a history of paying workers extremely low-wages, breaking up workers’ unions and firing activists who fight for a living wage.

The Globe and Mail documented Gildan’s move to the impoverished third world nation, where workers have little choice but to endure 11-hour shifts often for less than $6 a day.

The quest for lower costs eventually brought Gildan to Haiti, the poorest country in the Western Hemisphere. Haiti has a GDP per capita of $1,300 (U.S.) a year, and by some estimates nearly 80% of its 10.3 million citizens live on $2 (U.S.) or less per day. The country has been devastated by colonization, environmental degradation, resource depletion, dictatorships, foreign invasions, hurricanes, coups d’état, an unscrupulous oligarchy, and finally an earthquake that killed 220,000 people in 2010.

One union leader in 2014 described the conditions inside factories as “worse than slavery.”

“The slave owners had obligations to feed and clothe the slaves,” Haitian worker Jean Bonald Golinsky told the Globe. “Here you don’t have to do that.…The employer uses the extreme poverty and unemployment in Haiti because they know other workers will take the wage.”

Another Haitian compared life working for the Genesis factory, which produces clothing for Gildan, to being treated like an animal.

“We are not treated like humans, we are treated like animals,” the woman, who struggles to survive on $160 a month, told the Globe. “I am living a miserable life.”

“Gildan is responsible because when they come, they don’t talk to workers or inspect the shop floor,” she added.

Another worker, Jean-Robert Louis, 40, said “he was fired for taking part in a protest demanding a hike in garment workers’ minimum wage to 500 gourdes per day, or about $12 (he earned less than half that),” according to the Globe.

While most of the abuses documented go back to 2014, global union federation IndustriALL reports employees participating in workers unions are continuing to be targeted for termination as recently as November 2018.

Do only some black lives matter?