During the #StoptheBans rally in Washington, DC on Tuesday, a pro-life high school student was surrounded and harassed by protesters who called for him to be “fixed,” and screamed in his face.

Boris Kizenko, a well-spoken student at Holmdel High School, seemed largely unfazed by the leftist agitators, but did admit he was afraid after some of them directed death threats at him.

Likely to become an internet meme (totally not calling for that to happen…😉) one protester can be seen and heard screaming at the top of her lungs in an attempt to drown out the pro-life teen.

“A lot of students are also afraid of speaking out because of things like this,” Kizenko said while a woman screamed into his ear with a megaphone.

The grown woman told the teenager, “If you’re afraid, little baby, then go the fuck home.”

“You’re an incel and you can’t get laid,” she yelled into the megaphone.

Boris then asked the cameraman, “I wonder if she agrees with the people that have threatened me, that have hit me and have attacked me just for being here?”

Next, a young person disguised as anti-Trump rapper Slim Shady approached Kizenko and screamed in his face, “Why don’t rape victims matter to you?”

However, the young man wouldn’t listen to Kizenko’s response and decided to continue yelling inches from his face and eventually inches from the camera. 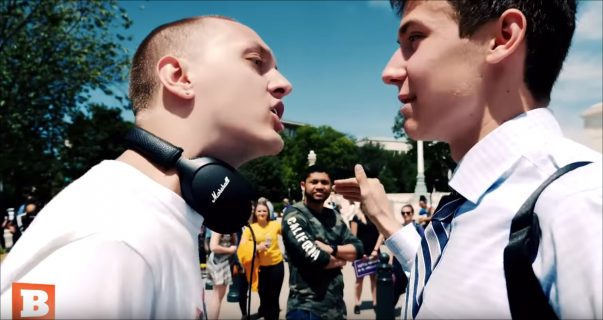 This video can be added to the hours and hours of footage of liberals showing they’re incapable of engaging in civil dialogue, choosing to instead harass, intimidate and assault those they disagree with.

Infowars reporter Kaitlin Bennet had a similar experience Tuesday at a pro-abortion rally in Austin, Texas.

Also, watch this compilation video highlighting the multitude of liberal attacks in 2019 alone.