Joe Biden was pictured outside of his basement for the first time since March Monday, in a stark reminder that the only Democratic candidate for President remaining was in hiding for two months.

Joe Biden out in public for first time since early March and with a full Secret Service detail as presumptive nominee. Previous Secret Service protection ended when he left office as VP. pic.twitter.com/jss7fSniJ6

“It feels good to be out of my house,” Biden told reporters from behind a face mask.

Biden says his message to the country on Memorial Day is “Never forget the sacrifices that these men and women made. Never, ever, ever forget.” Asked about leaving home for the first time in two months, he says, “It feels good to be out of my house.” pic.twitter.com/BpXABWKTOt

Biden was with his wife laying a wreath at a veterans park in Delaware for Memorial Day. 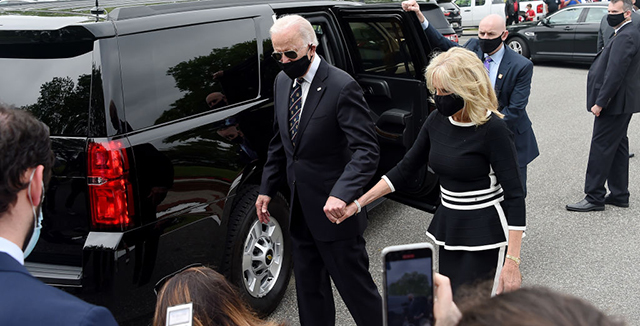 Democratic presidential candidate and former US Vice President Joe Biden (L) and his wife Jill depart the Delaware Memorial Bridge Veteran’s Memorial Park after paying their respects to fallen service members in New Castle, Delaware, May 25, 2020. – Joe Biden, the presumptive Democratic presidential nominee, emerged from more than two months of seclusion on May 25, wearing a black face mask during a visit to lay a wreath on the day the United States honors its war dead. Biden’s last public appearance was March 15 when he faced off against his former Democratic rival Bernie Sanders for a debate in a television studio held with no live audience. (Photo by Olivier DOULIERY / AFP)

After the short appearance, he soon scuttled back to the safety of his home.

Biden visits this memorial park a few miles from his Wilmington home every Memorial Day. There’s usually a ceremony but not this year. We waved to and saluted two groups of vets who were waiting to do their own tributes. pic.twitter.com/Nr2bJfwb0S

We are 161 days out from the election…And Joe Biden wants you to know that he will beat Joe Biden. Biden has set himself up for disaster. He is clearly an old school racist from a bygone era. His latest statements have created a neverending storm of criticism. Democrats are scrambling to normalize the damage. Promoting questionable poll numbers as their schizophrenic ideology clashes. Regardless everyone knows that Joe Biden doesn’t stand a chance. We are all just patiently awaiting what will be the most embarrassing Presidential debate in U.S. History.