Jussie Smollett’s attorneys claimed that even if the “Empire” actor did lie about his alleged racial attack, the Chicago police are actually to blame for investigating his claim so vigorously.

Yes, you read that right.

The bizarre claim by Smollett’s legal team was made in a court motion filed Wednesday where the city of Chicago is attempting to recoup $130,000 spent in police overtime related to investigating Smollett’s hate crime hoax. 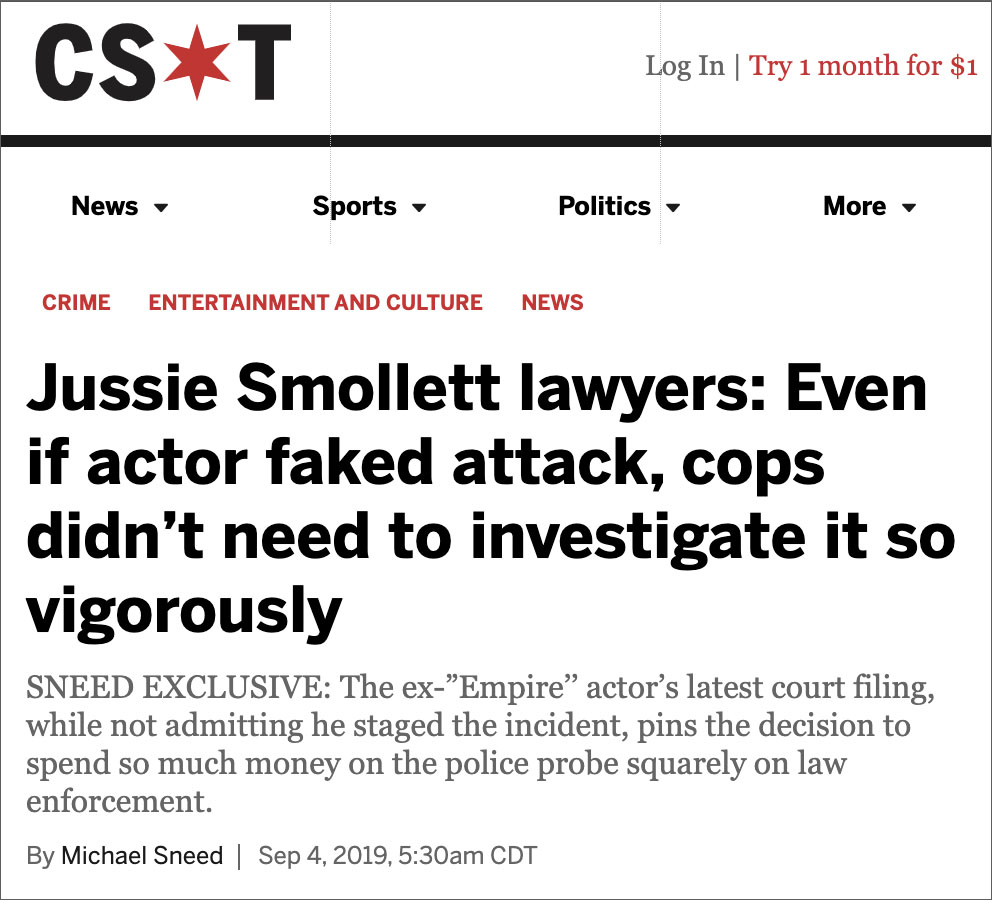 From the Chicago Sun-Times:

In the legal brief, obtained by Sneed, Smollett makes clear that he is not admitting he made false statements. “Mr. Smollett disputes any and all assertions that he made a false statement and was not a victim of a crime,” a footnote on the first page of the motion reads.

But even if he did, “The filing of a police report, in and of itself, does not necessitate a sprawling investigation nor does it, as a practical matter, usually result in an investigation as extensive as the one the CPD chose to undertake in this case,” the motion says.

“ … The City has failed to allege that Mr. Smollett was similarly ‘well aware’ that his statements to police would result in 1,836 hours of police overtime, or any other reasons why he should have known this would have been the case.”

In other words, Smollett is the victim because he didn’t know his false police report would actually be investigated.

The actor was eventually let go from “Empire” last month after the Chicago Police released Smollet’s sealed case files detailing his plot to hire MAGA hat-wearing Nigerian extras from “Empire” to stage a racial attack against him in order to blame Trump supporters.

The accomplices, known as the Osundairo brothers, sued Smollett for defamation in April after the actor refused to come clean about his hate crime hoax.

Though Smollett still maintains his innocence, the cultural zeitgeist has determined him to be a liar and a fraud in light of the mountains of evidence that’s surfaced since he filed the police report in January, with comedians like Dave Chappelle mockingly referring to him as “Juicy Smoliét.”

This is why leftist critics are trying to sink Chappelle’s new show. Most of it actually has a pro-social justice bias, but a single scintilla of dissent must not be allowed.pic.twitter.com/d2t8Xz0Yxv

Alex Jones presents a video of Maxine Waters conducting an interview with Extra TV where she defends and forgives Jussie Smollett for his unconscionable actions of faking a hate crime against himself.