A Washington state Democrat, who says he’s no fan of President Trump, is displaying a large Trump 2020 sign high on his yard after it triggered his neighbors.

Bremerton resident Kevin Chambers says his friend placed the oversized “Trump/Pence” sign on his yard in November as a joke while he was out of town.

“I’m more of a Democrat than I am a Republican,” Chambers admitted to King 5 News. “I’m not a Trump supporter and I thought he was being funny.”

“I had originally just laughed it off and decided I’d leave it up for a week or so and then take it down,” Chambers also said in an interview with Reason, acknowledging he’s “actually pretty liberal.” 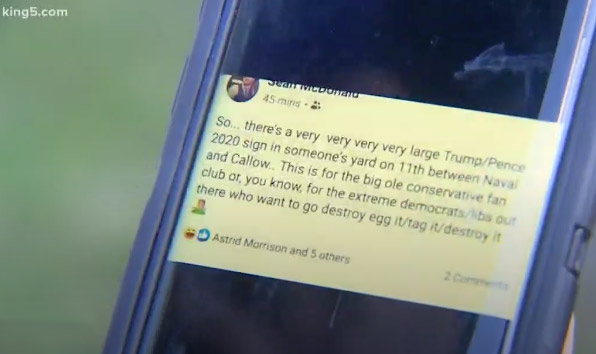 Chambers was ready to take the sign down when he came across a neighborhood Facebook group where someone was urging neighbors to egg, tag, or otherwise destroy the sign.

“I decided at that point I was going to leave it up,” Chambers asserted, adding that his “plan was when the Democrats named a ticket I was going to put their sign on the other side and just put them both up.”

Soon after, Chambers noticed the sign was vandalized with graffiti.

Rather than take the sign down, however, Chambers says his friend opted to install it atop tall wooden stilts, putting the top of the sign at least 15 feet off the ground.

At this point, he received a letter from the city informing him “City code is it can’t be more than 6 feet above the ground.”

Chambers argued as his sign is displayed above his four foot fence, it should give him a 2-foot variance.

The city alleged it does not enforce the code pro-actively and only responds when there is a citizen complaint, which Chambers points out is another form of bias given Bremerton voted largely in favor of Hillary Clinton during the last election.

“That’s someone who saw the giant Trump sign and didn’t like it. I guarantee if this had been a Biden or a Gabbard or a Warren [or] a Sanders sign, it would have never been reported,” Chambers told Reason.

Chambers plans to continue debating the issue with the city, which has given him until January 21 to comply or face fines or penalties.

Dear God : I pray for safety of president Trump.

Also, take advantage of the final hours of our Mega Blowout Sale with free shipping and up to 75% off our hottest items!