A lawsuit filed by the sister of pop singer Mariah Carey alleges she suffered sex abuse at the hands of their mother, who made her participate in late night Satanic worship that featured ritual sacrifices. 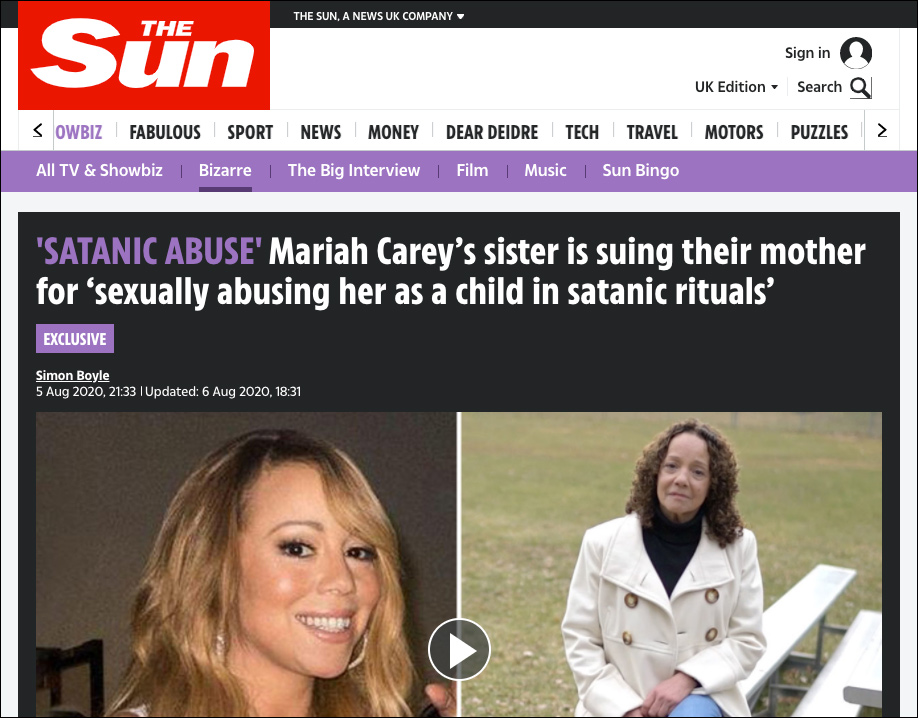 According to the lawsuit, obtained by The Sun, Alison Carey, 57, who’s been estranged from Mariah for decades, claims she was caused “immense psychological and physical damage, mental pain and anguish and intentional infliction of severe emotion distress” by their mother, Patricia, who forced her at the age of 10 to perform “sexual acts with both adults and children.”

“Defendant, who is Plaintiff’s mother, allowed and encouraged other male persons whose identities are at present unknown to engage in sexual acts as defined in New York Penal Law, specifically 130.52 (forcible touching), and 130.65 (sexual assault in the first degree), while Plaintiff was approximately 10 years of age,” the lawsuit filed with the State of New York Supreme Court states.

“A close family member used to wake me up just before 2am and take me to an old hall that looked like a castle, which was a short walk from the church we used to attend in Huntington, New York.

“The place is still there I could show you exactly where it is.

“The ceremonies or rituals were always between 2am and 4am and they weren’t every week as far as I can remember – just certain dates.

“Everyone would wear long robes with black hoods and walk in twos across to this place.

“I never understood what was going on – I remember there was some kind of a table or altar and they would chant and every one would stand in a circle. There would be around 20 people there – including children.

“Then terrible things would happen – things that a child should never see.

“I was sexually abused there. They told me that if I didn’t do what they told me or if I told them what was going on they would harm Mariah.

“Imagine being told that as a child? Of course I went along with what they said.

“I think I was about six when I first remember going there and it went on for a few years.

“I never heard them say the word Satan but the whole thing was so evil, so wrong – I’m sure they were Satan worshippers.

“It was terrifying – something that has stayed with me my whole life.

“I don’t remember ever seeing Mariah because she was a lot younger than me but that’s not to say she wasn’t there. It’s impossible to say.”

The lawsuit claims Alison, who was once arrested for prostitution, now suffers from depression, anxiety and PTSD, and turned to drugs in efforts to suppress memories of the traumatic experiences.

“As a result of the above Plaintiff has been diagnosed with post-traumatic stress disorder, anxiety and major depression, leading her to misuse both legal and illegal drugs in an attempt to suppress the horrific memories, and to undergo extensive professional counseling,” the suit states, according to The Sun.

Mariah’s other sibling, Morgan Carey, 60, reportedly “confirmed he and Alison had been taken to occult gatherings as a child but declined to comment further,” The Sun notes.

When America fully realizes that there does exist a Globalist Satanic Spiritual Attack on everything they stand for, there will be change.