June is Pride Month and this year corporations are taking advantage of the commemorative time by cashing in on the demographic suddenly deemed acceptable by the global establishment.

Nearly every major corporation is running an ad campaign targeting the LGBTQ community and even brands directed at children have joined in.

From Converse to Adidas, Disney and Nickelodeon, there are hundreds of companies suddenly jumping on the bandwagon.

Scroll to the bottom of this article to see some of the advertisements for yourself.

Aside from targeting children, there is nothing wrong with providing products directed toward the LGBTQ crowd, but most people see right through the phony virtue signaling from big corporations.

The following memes highlight the absurdity of this June’s LGBTQ gold rush. 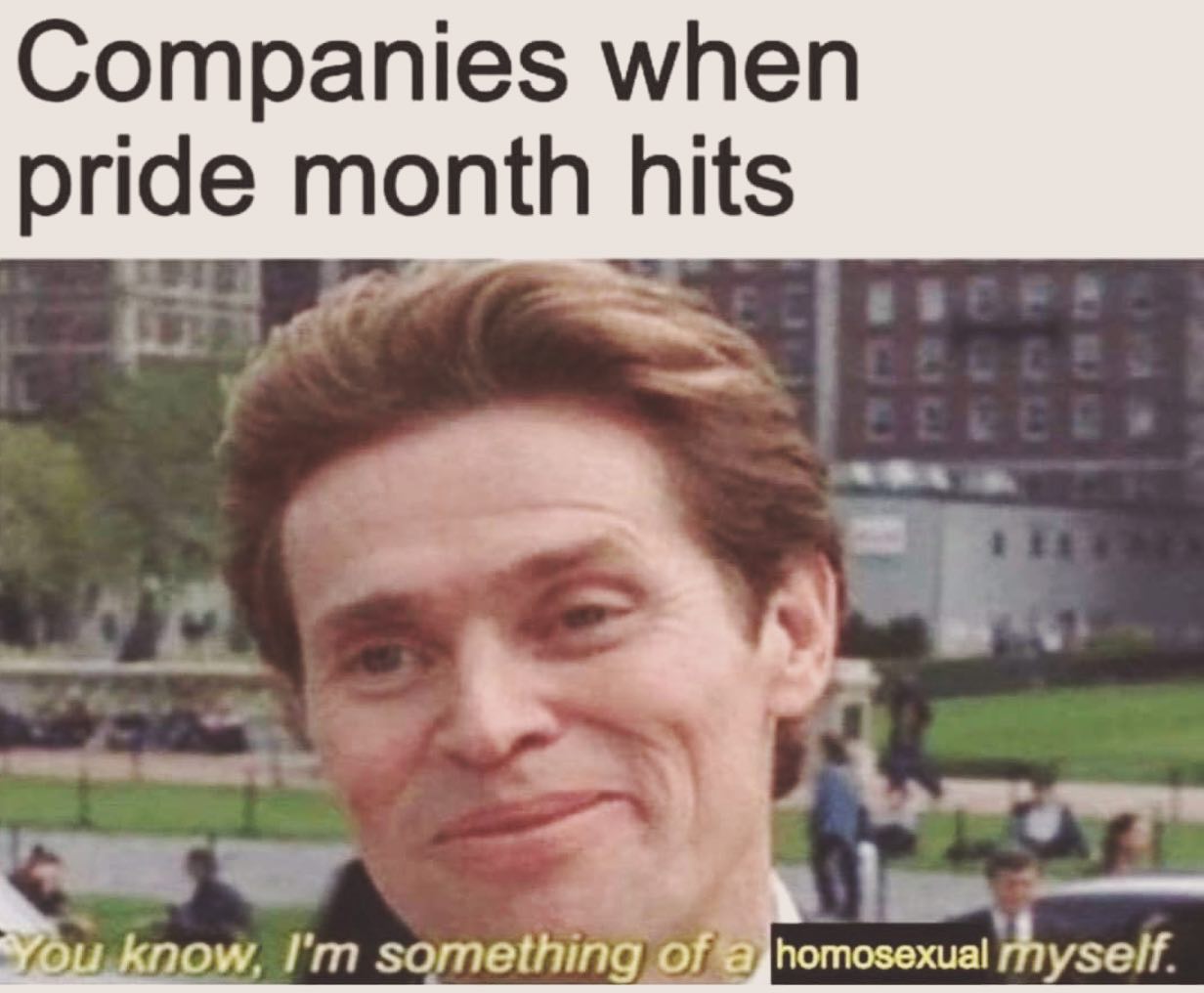 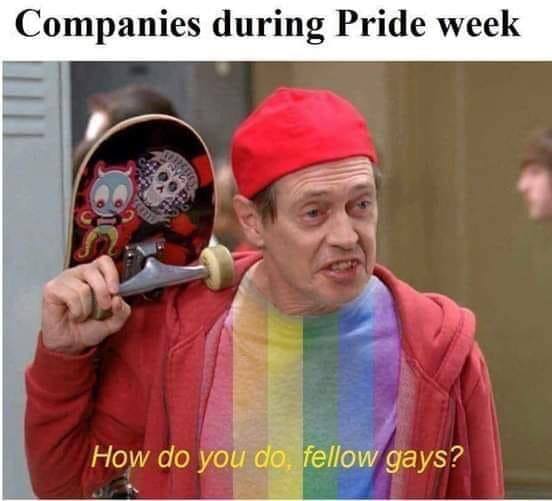 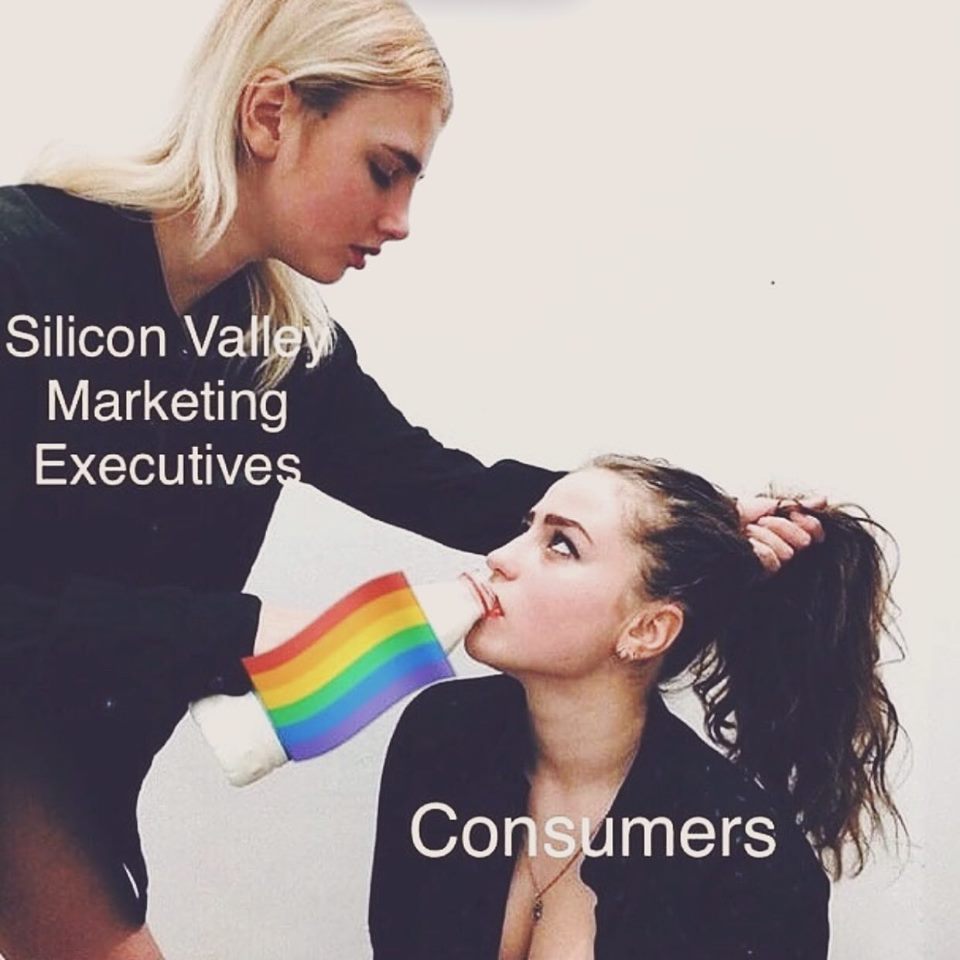 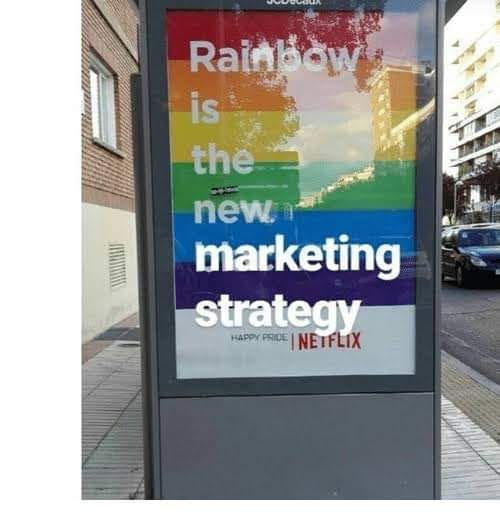 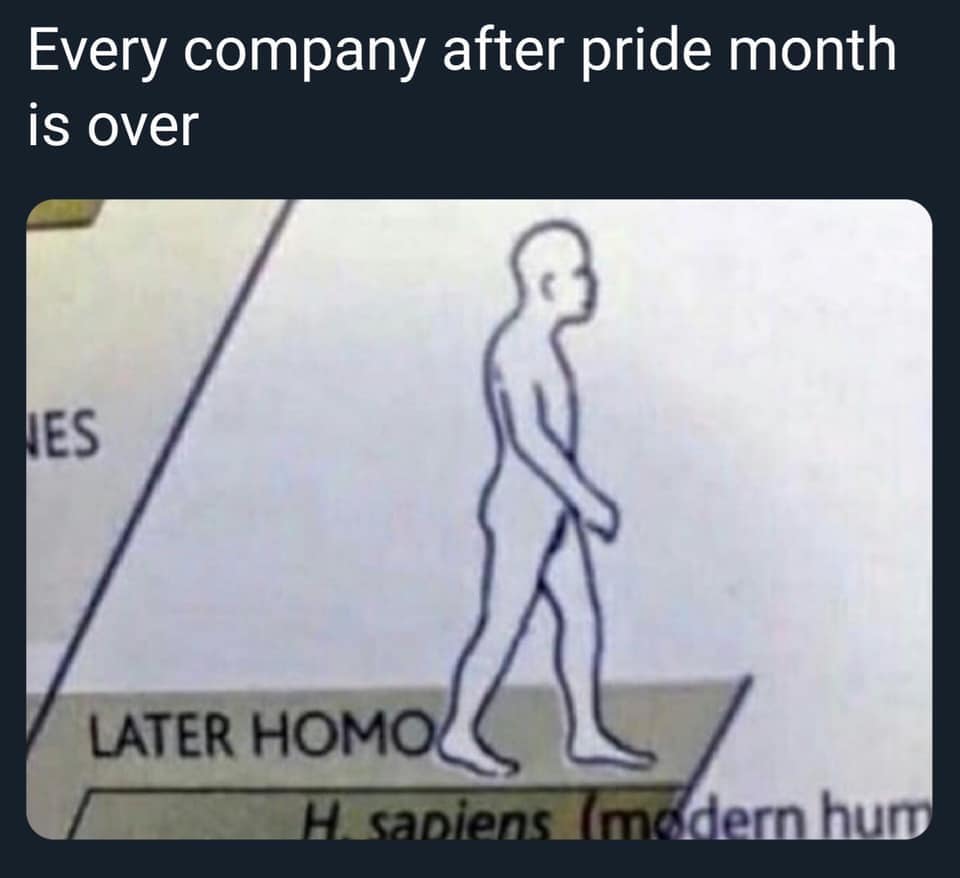 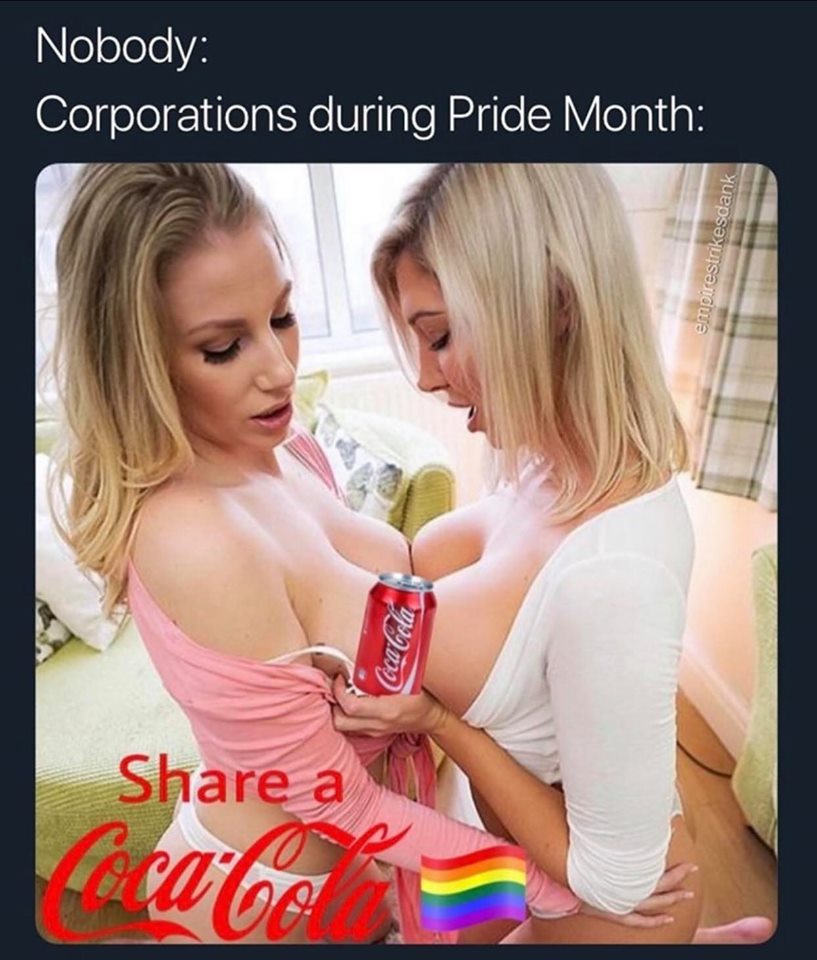 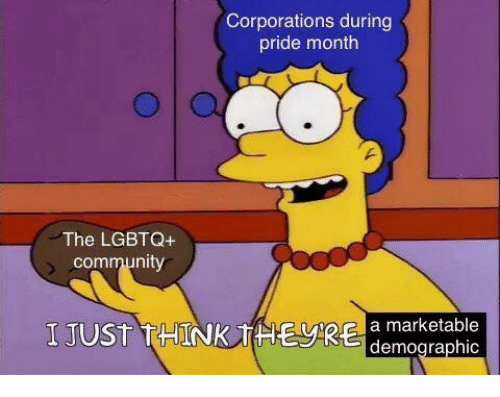 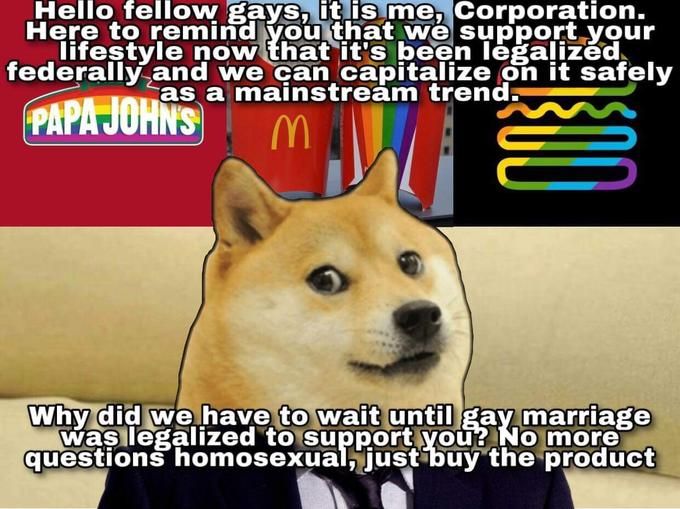 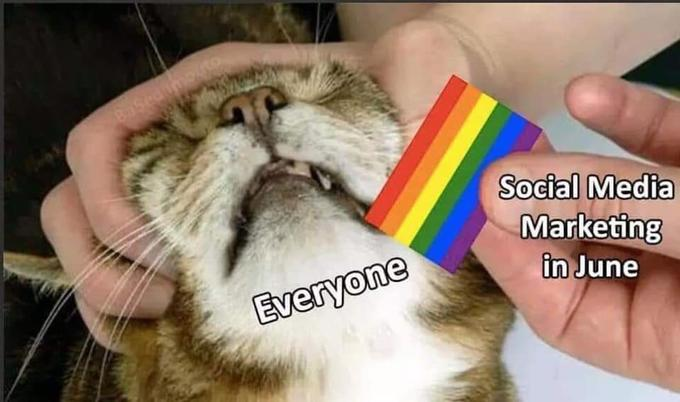 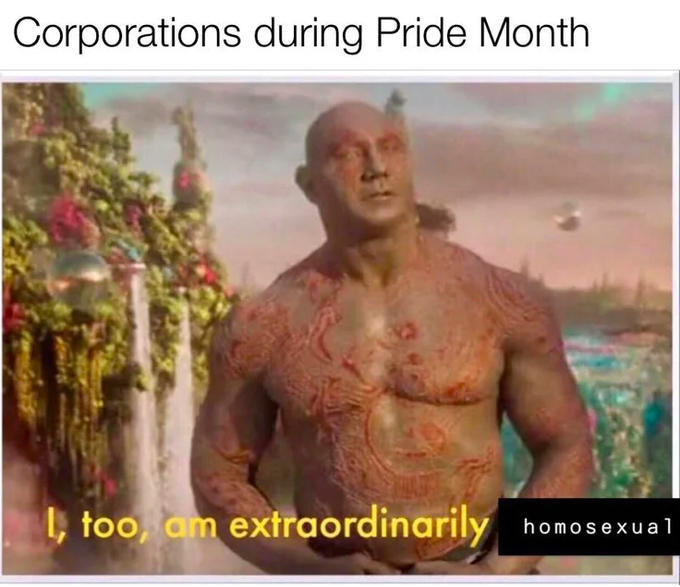 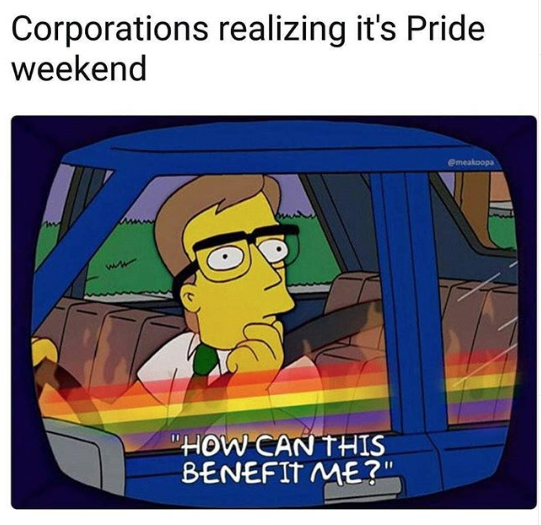 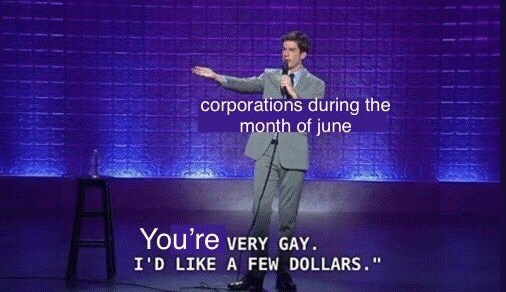 Below are some of the companies promoting their Pride Month products on social media:

We’re happy to launch our Pride Collection, partnering with six individuals connected to the LGBTQ+ community who show the power of expressing one’s true self. Contributions are supporting @ItGetsBetter @OutMetroWest & @FenwayHealth. https://t.co/N7VTHLhf98 pic.twitter.com/ip2GGhtCE9

The rainbow flag represents more than four decades of pride—and every color tells a story. pic.twitter.com/x7RKnZPpW4

We want to wish everyone a HAPPY PRIDE and encourage all of our LGBTQ+ fans to stand proud all year long! 💖🦄🌈✨⁣
⁣#pride #happypride #powerpuffyourself #pridemonth #powerpuffgirls pic.twitter.com/hR8ZJ9ry1D

We believe diversity makes us better and stronger. This #PrideMonth, we’re incredibly proud to celebrate all members of the LGBTQ+ community. pic.twitter.com/4FuVRBIoNT

Special edition UA #Pride HOVR SLK. Ready to support Pride parade marchers across the world. #UnitedWeWin. Under Armour is proud to support @AthleteAlly in their mission to champion equality and create an inclusive community for all athletes. Support now. https://t.co/xbu1IaL9nD pic.twitter.com/IQKw86UCv2

At Bank of America we’re proud allies to our LGBT+ employees and the wider LGBT+ community. Throughout the month we’re excited to celebrate all things Pride alongside our partner @LoveHasNo_. #BofAPride #LoveHasNoLabels pic.twitter.com/MLcCzvwyOd

Celebrate with #Pride — introducing a capsule of classics, made with self-expression in mind. Explore more: https://t.co/Fo8AC9ImHb

NOTHING BUT PRIDE IN #MYCALVINS

In support of LGBTQ+ equality, #CALVINKLEIN has made a donation to @HRC™. pic.twitter.com/CSmPpT2Slf

At Bank of America we’re proud allies to our LGBT+ employees and the wider LGBT+ community. Throughout the month we’re excited to celebrate all things Pride alongside our partner @LoveHasNo_. #BofAPride #LoveHasNoLabels pic.twitter.com/MLcCzvwyOd

Show your pride with the Blizzard Pride Pin! 🏳️‍🌈 Your purchase of the pin through July 31st will benefit The @TrevorProject. Get yours while supplies last ➡️ https://t.co/tIusbA8WCR pic.twitter.com/xLivq6YN7a