Michigan Gov. Gretchen Whitmer is embroiled in new controversy after reports surfaced that her husband allegedly sought to leverage his family’s power to get their boat prepared for use in time for Memorial Day weekend.

The news comes shortly after Gov. Whitmer slightly relaxed lockdown orders for some popular vacation spots in the state, while warning Michiganders to “think long and hard before you take a trip into them.”

“This morning, I was out working when the office called me, there was a gentleman on hold who wanted his boat in the water before the weekend,” Dowker wrote. “Being Memorial weekend and the fact that we started working three weeks late means there is no chance this is going to happen.”

“Well our office personnel had explained this to the man and he replied, ‘I am the husband to the governor, will this make a difference?'” 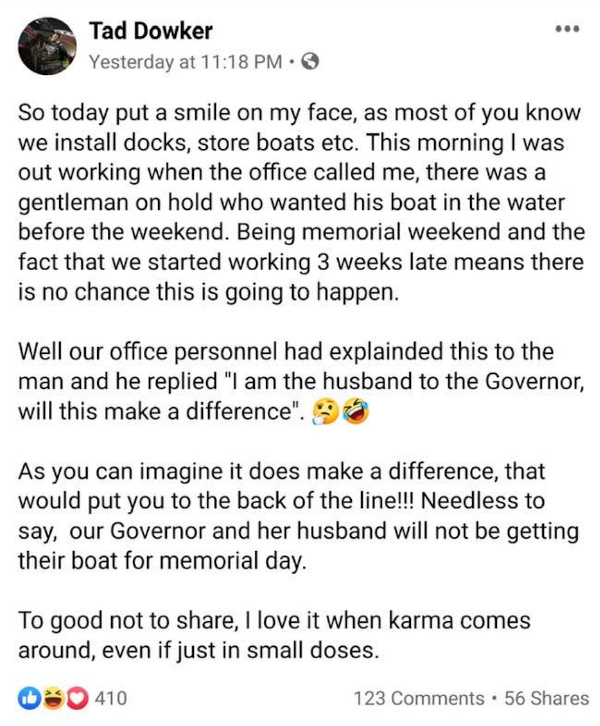 Dowker reportedly removed the post after it went viral and attracted a flood of attention and media inquiries.

“After a long day of keeping crews running, adhering to the additional safety regulations that need to be in place to operate our small business and fielding calls from customers frustrated with our lagging installation schedule I was told the governor’s husband called asking for install availability,” the company explained in a follow-up post. “Up until this point we, as a company, had no idea we installed their dock or boat.”

“Obviously, with the motorized boating prohibition in our early days of COVID-19, he thought it might get a laugh. It didn’t. And to be honest, I wasn’t laughing either when it was relayed to me, because I knew how it would be perceived, he regrets it. I wish it wouldn’t have happened. And that’s really all we have to say about it,” Whitmer said during a press conference on Tuesday.

Whitmer was blasted by her constituents last week after vehicles were spotted in the driveway of her summer home in Antrim County.

Until recently, Michiganders were banned from visiting their second homes under Gov. Whitmer’s draconian lockdown rules.

“Apparently, it was no coincidence that Big Gretch ‘unlocked’ for the Memorial Day weekend, the tourism-dependent regions where she just happened to own a home and boat she just happened to want to use,” a Michigan resident told Infowars. “How banana republic and elitist of Dr. Mallory to play the ‘governor’s husband’ card to get preferential treatment.”

“It’s time for we the people of Michigan to declare all the regions of our great state open for business and fire this dictator who champions fake science.”

Alex Jones breaks down the horror behind the Michigan Governor’s purposeful planting of COVID-19 in nursing homes, endangering the most vulnerable of the population to the deadly virus.

Alex Jones breaks down the hypocrisy of the media stoking a race war after the Ahmaud Arbery shooting, while ignoring videos of a racist coward beating up elderly white people in his ‘care.’