The Minneapolis Police Department told residents last week that they should “be prepared” to surrender their belongings to criminals and obey their commands.

With Minneapolis experiencing a 46% increase in carjackings and a 36% increase in robberies compared to this same time last year – thanks to the far-left city council all but defunding law enforcement – MPD has issued a citywide email warning residents not to resist the emboldened criminals.

“Be prepared to give up your cell phone and purse/wallet,” the police said in their email, adding that citizens should listen to criminals and “do as they say.” 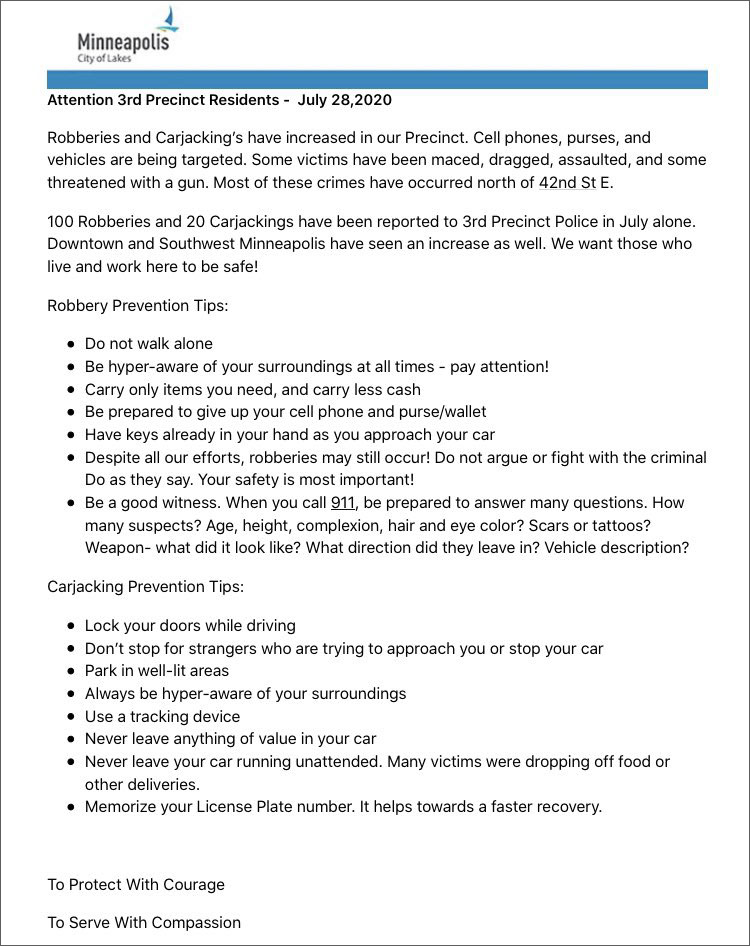 Notably, MPD makes no suggestion for residents to exercise their Second Amendment right to self-defense.

South Minneapolis resident Steve Taylor, who moderates the city’s Uptown Crime page, pointed out the hypocrisy of the Democrat city council protecting themselves with private armed security while stripping the city of much-needed law enforcement.

“What we’re hearing again and again is people don’t want less public safety, they want better public safety,” Taylor said. “When (City) Council has their own armed security and community members are being robbed at gunpoint often in broad daylight, that just seems unfair.”

“I think we need more police. Of course we need reformed police and better police that police all of Minneapolis equally, keep everyone equally safe from violent criminals,” he added.

As we’ve reported, many police precincts nationwide kneeled in solidarity with Black Lives Matter protesters who want to see them defunded, and in some cases killed.

Similarly, other Democrat-run cities like Chicago and New York, which have also called for defunding their police, are experiencing skyrocketing crime and violence in 2020.

In New York, for example, shootings have spiked by nearly 50% and homicides increased by 21% compared to the same period last year.

And Chicago experienced its most violent day in 60 YEARS in June when 18 people were killed in less than 24 hours, which Mayor Lori Lightfoot blamed on “gun violence” despite the city having some of the strictest gun control measures in the country.

Owen Shroyer and Gretchen Smith of Code of Vets discuss the undergoing militant insurrection of America, and how it may intensify as the election draws closer.