The city of Minneapolis has suspended a planned series of racially-segregated meetings in which city employees were expected to discuss the ‘400th anniversary of slavery’ in the United States and its long-term effects, local media reports.

The program was advertised on flyers endorsed by the Minneapolis city government, and provided an agenda for “Sacred Conversations with City Staff,” which were to be held on three dates in May, June and July, with “White Bodied Staff” and “Black Bodied Staff” meeting in separate locations at the same times.

“This year marks the 400 Year Commemoration of African people being brought to Jamestown, VA by the British and forced into slavery,” the flyers read. “While Africans had been enslaved in the Americas prior to this date, this commemoration gives us an opportunity to reflect on the lasting impact of this event, as well as to honor the legacy of resistance and liberation of African American people.”

“Led by the City’s Racial Equity Coordinators, Sacred Conversations will give an opportunity for staff to discuss how they relate to the enslavement, resistance, and continual push for liberation for African American people. Come take part in the conversation to have a better understanding of our role as City staff.” 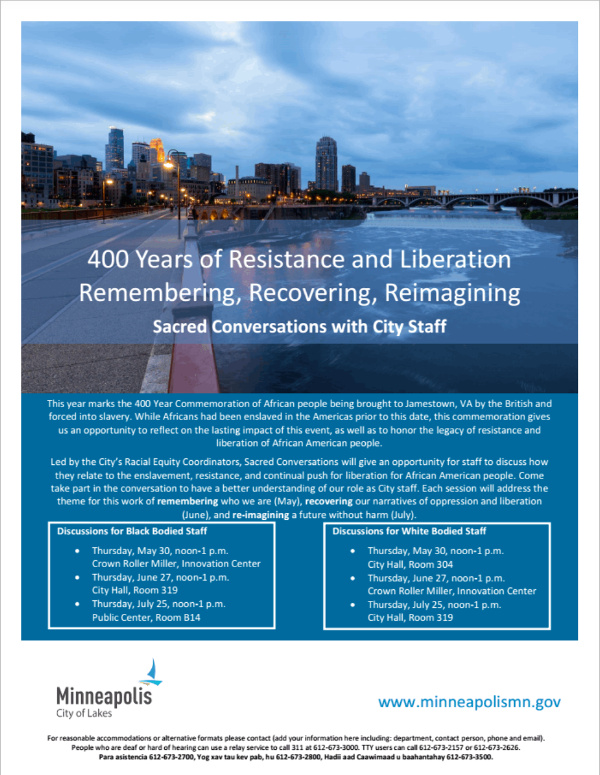 Themes for the three meetings were to include, “Remembering who we are,” “Recovering our narratives of oppression and liberation,” and “Re-imagining a future without harm.”

City Coordinator Nuria Rivera-Vandermyde canceled the planned sessions, but only temporarily, and reportedly plans to reschedule them.

“It came to my attention … that sessions had been promoted publicly in a way the city does not condone, as we cannot nor will we divide people based on race, ethnicity or any other protected class,” she said in a statement, as reported by the Minneapolis Star Tribune.

Minneapolis Urban League President and CEO Steven Belton told the Tribune that racially homogeneous meetings would foster an atmosphere where people could be comfortable expressing their opinions on sensitive topics.

“If we’re honest about our personal experiences, we talk differently when we’re in the room with people that look like us,” Belton said.

Matt Bracken discusses a growing number of migrants from Africa joining the surge across the U.S. border.