A teenage boy with autism was found deceased near Melbourne, Australia, over 32 hours after he had gone missing — and after his family and local residents were ordered to call off searching due to draconian coronavirus rules.

William Wall, 14, embarked on his daily run at approximately 6:45 am on Tuesday morning but never came home, his family said.

A massive search effort was launched, with family and friends joining authorities to look for William.

Victoria Police eventually told civilians they could no longer participate and must return home, or risk violating current rules barring state residents from traveling more than five kilometers from their homes.

“In line with coronavirus restrictions, at this stage we do not require any assistance from the public,” local police wrote on Facebook on Tuesday night.

“We want to say a big thank you however, for the all the offers we have received.” 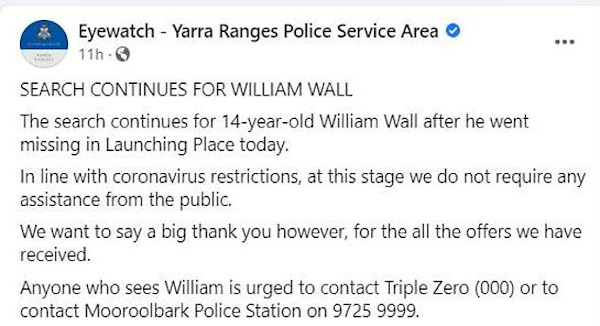 “We’ve been told by all the police, saying we’re not allowed to help because we’re beyond the five-kilometer radius, which is going to put more of a delay in finding him,” William’s older brother Harrison told local media.

Peta & her 13yo daughter are frustrated at being turned away & plan to set out into the bush in search of William Wall anyway. Many locals have the same idea @theheraldsun pic.twitter.com/K92Vx8zbht

Outraged locals expressed their frustration as the potential life-and-death crisis played out.

“I’d rather go outside the five-kilometer radius and find him than stick to five kilometers and let him stay out there another night,” family friend Flynn Cousens said on Wednesday.

Another resident told the Daily Mail, “If that was my kid out there, I would want every person on the ground out there, just having a look.”

Sadly police have confirmed William Wall has died. He was found in Yarra Junction, less than 2km from his home @theheraldsun pic.twitter.com/Jr377DELiq

William’s body was reportedly found in dense brushland less than two kilometers from his house.

Authorities have ruled his death a suicide.

Alex Jones breaks down how kneeling for the flag at sporting events has become a requirement in the culture of authoritarian outrage.