On Friday, multiple mainstream media outlets were forced to report on the results of a study showing hydroxychloroquine is actually effective in combating COVID-19, vindicating President Trump who has touted the drug for months.

The Henry Ford study reports coronavirus patients “given hydroxychloroquine were much less likely to die,” according to CNN.

More on the study from Fox News:

At a news conference, Dr. Marcus Zervos, division head of Infectious Disease for the Henry Ford Health System, attributed the results to giving the drug to patients as an early treatment.

“What we think was important in ours … is that patients were treated early. For hydroxychloroquine to have a benefit, it needs to begin before the patients begin to suffer some of the severe immune reactions that patients can have with COVID,” Dr. Zervos said about the highly analyzed peer-reviewed study.

“Considered in the context of current studies on the use of hydroxychloroquine for COVID-19, our results suggest that the drug may have an important role to play in reducing COVID-19 mortality,” Zervos said in a Henry Ford Health System press release.

▶️Mortality Cut In HALF In Sick Hospitalized Patients

“As doctors and scientists, we look to the data for insight. And the data here is clear that there was benefit to using the drug as a treatment for sick, hospitalized patients.”

On Twitter, the study’s findings were taken as another win for President Trump, who held strong on the drug’s efficacy despite constant negative press from the mainstream media. 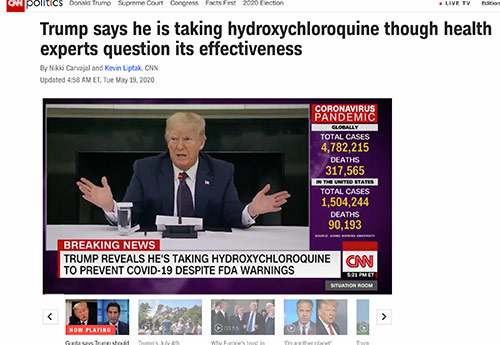 “I can’t keep track anymore. So Trump was right… again?” remarked independent journalist Tim Pool, asking, “How long until this gets reversed.”

So Trump was right… again?

How long until this gets reversed https://t.co/zUNrOrYQMb

“The only ones surprised by this are the wank crankers at CNN,” said actor James Woods. “I’m assuming half the staff is on suicide watch after having to report this.”

The only ones surprised by this are the wank crankers at #CNN… I’m assuming half the staff is on suicide watch after having to report this. https://t.co/3rJNmtrdYs

“So fewer people died because they took the drug… Thank you, POTUS for doing the right thing even in the face of a DC culture attacking you no matter what you do,” Grenell wrote on Twitter.

So fewer people died because they took the drug @realDonaldTrump suggested….

Thank you, POTUS for doing the right thing even in the face of a DC culture attacking you no matter what you do. https://t.co/AKh7siYqNb

Literally the only reason media came out so hard against this had nothing to do with medicine or science. It was simply because Trump talked about it. Just amazing. https://t.co/ISF6Z1R8RT

How many people lost their lives or suffered needlessly because the morons at NYT, WaPo, CNN & MSDNC wanted to say that President Trump was wrong?

The disgusting, lying media fought the president tooth and nail for months telling us this drug was deadly. Every damn newsroom repeated this crap. Now they tell us it helped. How about apologizing to the American people and the president, you frauds.https://t.co/4EpjLsW1Pg

It’s not surprising at all that hydroxychloroquine works—and to be clear for you headline-only readers, it cut mortality of Covid-19 patients BY HALF. https://t.co/CZDvaZlgJA

CNN viciously attacked @realDonaldTrump when he said hydroxychloroquine will save lives.

Now months and tens of thousands of deaths later, CNN admits that Trump was right.

Fake news is the enemy of the people!

Gilead’s Remdesivir costs $9, sells for $590 per vial vs Hydroxychloroquine at $1 per pill. A full course of treatment will be $5,700. No wonder Fauci, who has eagerly but unsuccessfully pushed the drug for HIV, Ebola has made it “the standard of care”.