New footage of the moments before she was shot dead by a police officer during a knife attack shows Ma’Khia Bryant yelling, “I’m going to stab the f**k out of you bitch!” – yet again vindicating the officer’s response.

Leftists have continually lied about the incident in Columbus, Ohio, at first claiming Bryant was unarmed and then trying to argue that she was “just a child” who got involved in a “knife fight” and should have been left alone.

In reality, the new footage once again underscores what really happened – Bryant was engaged in a frenzied knife attack and by shooting her dead, the officer saved the lives of two other African-American women.

The 26-second video captured by a neighbor’s garage camera across the street shows Bryant charging towards another woman while screaming “I’m going to stab the f**k out of you bitch!”

As the other bodycam video of the incident shows, Bryant was carrying a kitchen knife and trying to slash her victims before the police officer, Nicholas Rearden, shot her dead. 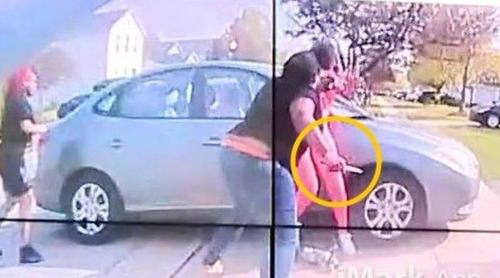 Another eyewitness, Ira Graham III, told the Columbus Dispatch, “I believe in truth and facts. Video doesn’t lie. “She was in full attack mode.”

Bryant “was literally aiming a knife at this young lady,” Graham said of the female in pink seen in the clip. “She needed to be stopped at that point. That young lady’s life was at stake.”

As Raheem Kassam notes, the new footage confirms that Bryant “makes an overt threat to kill then proceeds to act on it. The officer is a HERO!!!”

Wow… this footage (especially with audio) *should* shame everyone who prejudged the officer as guilty.

Including the illiterate clown @KingJames.

She makes an overt threat to kill then proceeds to act on it. The officer is a HERO!!! https://t.co/tAzHZFEX1I

As another respondent pointed out, “This video appears to disprove entirely the family members who said Bryant “grabbed a knife to defend herself” and that she was “fending off a physical assault when police arrived.”

this video appears to disprove entirely the family members who said Bryant "grabbed a knife to defend herself" and that she was "fending off a physical assault when police arrived." https://t.co/08cfQj0giv

As we highlighted yesterday, BLM supporters initially tried to claim that Bryant had called the cops for help, but the 911 tape clearly proves her intended victims made the call.

That wasn’t made clear however in an NBC News report on the issue, which completely omitted the fact that the 911 call was made by Bryant’s intended victim. The network also stopped playing the footage before the point where Bryant was clearly seen to be wielding a knife.

Despite the overwhelming amount of evidence proving the shooting was not only justified but crucial to save lives, BLM has adopted Bryant as their latest martyr.

Columbus Mayor Andrew Ginther appears to have bowed to the maniacal mob, saying that Bryant’s death was a “failure of the community” and that Officer Rearden “will be held accountable” if found guilty of wrongdoing.