Update 3: Northam has released an apology, reiterating his earlier apology – yet still not elaborating on whether he was the guy in blackface or the KKK outfit.

“That photo and the racist offensive attitudes it represents does not reflect that person I am today, or the way I have conducted myself as a soldier, a doctor and a public servant. I am deeply sorry. I cannot change the decisions I’ve made, nor can I undo the harm my behavior caused then and today. But I accept responsibility for my past actions, and I am ready to do the hard work to regain your trust.”

My fellow Virginians, earlier today I released a statement apologizing for behavior in my past that falls far short of the standard you set for me when you elected me to be your governor. I believe you deserve to hear directly from me. pic.twitter.com/1rSw1oxfrX

Meanwhile, calls for Northam’s resignation have been mounting among prominent Democrats.

Governor Ralph Northam must resign. There is no excuse for the shockingly racist picture. I note that Florida Republican Secretary of State Michael Ertel resigned last month for being in blackface. This picture is even worse. It’s blackface next to a KKK figure. https://t.co/0Ujze6odGW

Update 2: It appears Northam’s apology – in which he did not elaborate if he was dressed in the KKK outfit or wore the blackface – was not accepted by his fellow democrats, and first Kamala Harris then the NAACP have both called on him to resign. And Trump has yet to tweet even once on the topic.

Black face in any manner is always racist and never okay. No matter the party affiliation, we can not stand for such behavior, which is why the @NAACP is calling for the resignation of Virginia Governor @RalphNortham

Leaders are called to a higher standard, and the stain of racism should have no place in the halls of government. The Governor of Virginia should step aside so the public can heal and move forward together.

Perhaps he should take a note out of his own hypocritical Twitter virtue-signaling during the campaign (link here): 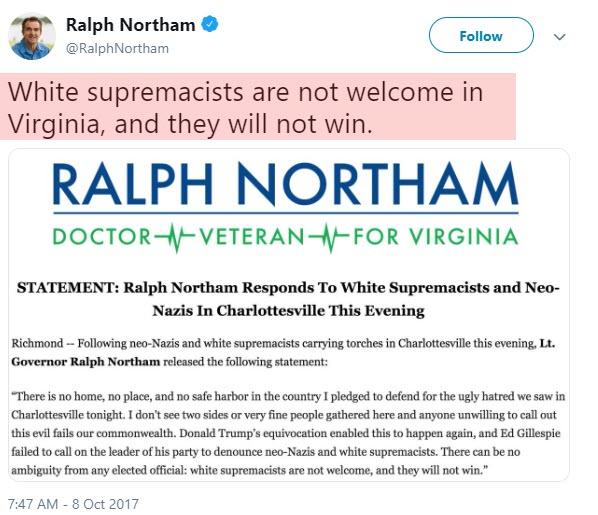 Update 1: Northam has apologized in a statement – without admitting whether he wore the blackface of the KKK outfit.

“I am deeply sorry for the decision I made to appear as I did in this photo and for the hurt that decision caused then and now,” reads the statement.

“This behavior is not in keeping with who I am today and the values I have fought for throughout my career in the military, in medicine, and in public service.”

The statement continues: “I recognize that it will take time and serious effort to heal the damage this conduct has caused.”

Virginia Governor Ralph Northam’s (D) 1984 medical school yearbook features several pictures under Northam’s name; a classic yearbook headshot, an image of Northam leaning against a car, one of him in a rural setting, and a picture of two individuals wearing blackface and KKK robes – one of whom is presumably Northam. The photo was first reported by Big League Politics and confirmed by the Virginian-Pilot which photographed the yearbook.

Under the photo of the men in blackface and the Klan hood are listed Northam’s alma mater, Virginia Military Institute, and his interest: “Pediatrics.” His quote is listed as “There are more old drunks than old doctors in this world so I think I’ll have another beer.”  –Virginia Pilot

According to AP, Republican state Sen. Bryce Reeves said in a statement that Northam should tender his resignation if the photo is accurate.

“I hope that this picture is inaccurate and that the Governor brings clarity to this issue. This has no place in Virginia,” said Reeves. 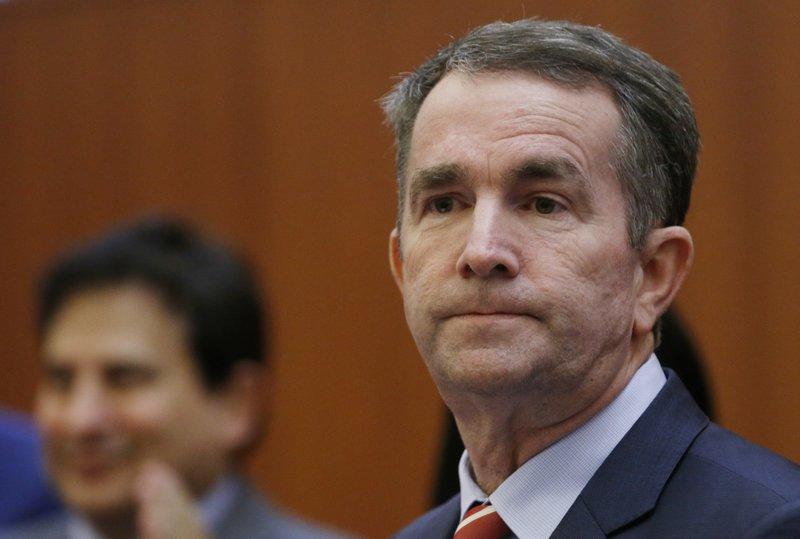 Virginia Republican Party Chairman Jack Wilson echoed Reeves’ sentiment, stating: “Racism has no place in Virginia. These pictures are wholly inappropriate. If Governor Northam appeared in blackface or dressed in a KKK robe, he should resign immediately.”

Wow, Northam really did this pic.twitter.com/cS7BvTqPfh

Northam, a pediatric neurologist, made headlines earlier this week discussing a controversial abortion bill that would loosen restrictions in third-trimester abortions.

Heck of a way to kick off Black History Month. https://t.co/KyJij7VJh4

Every 2020 presidential campaign right now: GET ME THE YEARBOOKS!

Virginia Governor Democrat Ralph Northam appears to have dressed in blackface for his college yearbook and posed alongside someone in a KKK robe. Gross insensitive behavior. He’s the same Democrat who was supporting killing babies during delivery at full term this week. pic.twitter.com/qvVKcqjfVt

Have your thoughts changed at all since you tweeted this? pic.twitter.com/1PGXLsObTF

I would think Democrats would be celebrating this.

“His whole life has been about exactly the opposite and that’s what you need to examine, not something that occurred 30 years ago,” adding “While it’s in very poor taste, I would think no one in the General Assembly who would like their college conduct examined. I would hate to have to go back and examine my two years in the Army. Trust me. I was 18 years old and I was a handful, OK? His life since then has been anything but. It’s been a life of helping people, and many times for free.”

In 2013, Northam came under fire from civil rights groups for refusing to shake hands with his black Republican opponent.

And who could forget this controversial and ironic ad during the Virgina gubernatorial race between Northam and Republican Ed Gillespie in which a Confederate flag-toting racist – ostensibly a Gillespie voter – chased minority children in a truck?

PS: @EdWGillespie, call your oppo research firm and ask for your money back.

As mentioned above, Northam pulled a Robert Byrd (Hillary Clinton’s mentor and former “Grand Cyclops” of the KKK) and claim he’s a changed man. Or, perhaps he will pull a Kevin Spacey and choose to live his life as a gay man as a diversion. 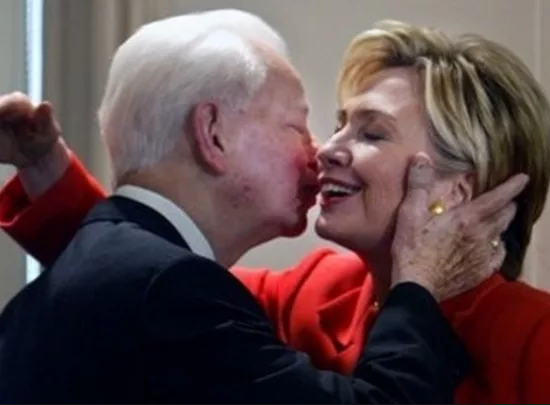 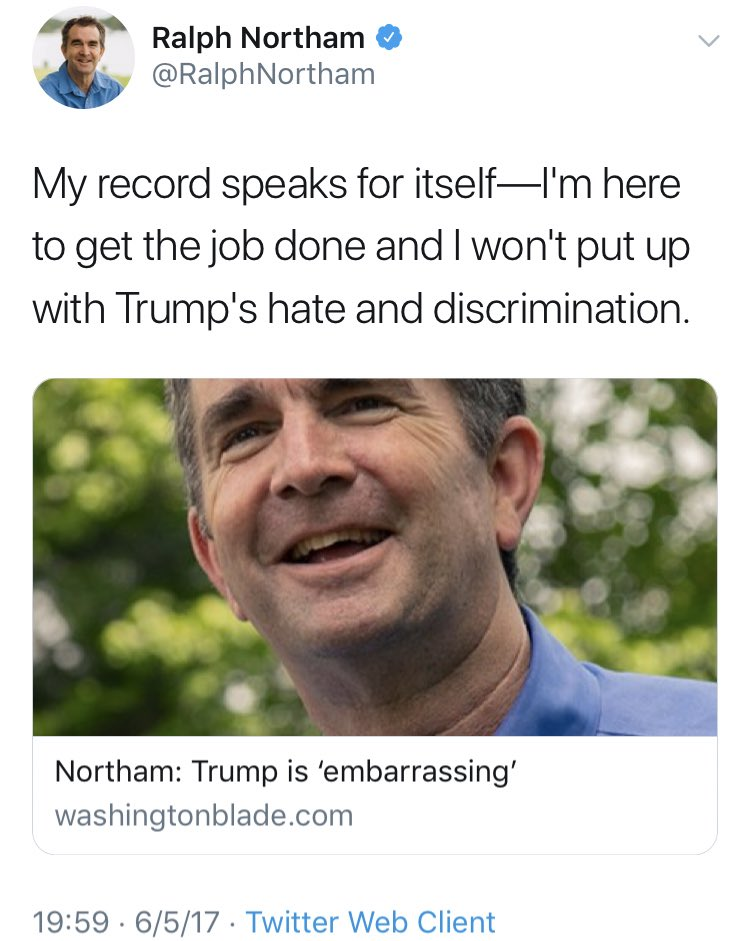