The state of Ohio has reversed its ban on the anti-malarial drug Hydroxychloroquine for Coronavirus just hours after announcing the move.

The Ohio Board of Pharmacy announced the ban to go into effect on July 30, but DeWine stepped in and snuffed out the ban Thursday.

The political class and medical establishment led by NIAID director Dr. Anthony Fauci is trying to sully Hydroxychloroquine’s reputation after President Donald Trump touted the drug, which people credit with saving their lives.

Fauci has recently personally targeted DeWine’s state of Ohio with criticism about its Coronavirus response.

NATIONAL FILE REPORTED: “Dr. Stella Immanuel, who went viral after delivering remarks at the America’s Frontline Doctors Summit in Washington, D.C. on Monday, launched a new campaign to encourage COVID-19 patients who were treated with hydroxychloroquine and recovered to share their experiences on social media, claiming that if the campaign is successful and the drug is used across the country, COVID-19 can be eradicated in 30 days…”

I reported: NIAID director Dr. Anthony Fauci is now pushing the use of “goggles” on a weary, beaten-down populace, his latest in a string of recommendations that include numerous false or contradictory statements.

Dr. Anthony Fauci to @DrJAshton: “If you have goggles or an eye shield, you should use it. It’s not universally recommended, but if you really want to be complete, you should probably use it if you can.” https://t.co/3B7YOTueKi pic.twitter.com/ROjmoqUS4n

Fauci spoke at the AFT conference today. This is what he said. Dr Fauci just said teachers at a minimum should wear masks, eye shields and gloves. He also stated wearing some sort of over garment that can be removed disposed or cleaned after class would be good.

Vaccine oligarch Bill Gates expressed apathy in a CBS interview about the fact that his Moderna Coronavirus vaccine, which National Institutes of Health (NIH) has a financial stake in, is testing horribly in vaccine trials, with at least 80 percent of trial subjects reportedly suffering side effects. This news comes on the heels of a major protest in Africa against Coronavirus vaccines being tested on black people on the continent.

Military insurer Tricare admitted that it wrongly told more than 600,000 U.S. military members that they had the virus. Hospitals in Florida are showing massive problems with testing accuracy, with Orlando Health admitting that its 98 percent positive rate was actually 9.4 percent. The CDC admitted that it is mixing antibody and viral test results to derive its case numbers and you can test positive on an antibody test if you have antibodies from a family of viruses that cause the common cold. Here is Gates responding to vaccine side effects:

Even CBS pressures Bill Gates on the topic that almost everyone had side effects. He doesn’t seem to care.
pic.twitter.com/2SiBmowJo3

No wonder people in Africa are protesting the vaccine tests.

National Institutes of Health (NIH) own a financial stake in the Bill Gates-funded Moderna Coronavirus vaccine, raising big questions about the supposed impartiality of the federal government’s policy decisions during the Coronavirus outbreak. NIAID director Dr. Anthony Fauci, a financial ally of Bill Gates whose institute partnered on the Moderna vaccine and is part of NIH, has been critical of Hydroxychloroquine and the FBI even raided a health spa serving intravenous vitamin C, which are competitors to a vaccine.

“We do have some particular stake in the intellectual property” for the Moderna vaccine stated Francis Collins, the director of NIH, in a revelatory recent Economic Club panel discussion. “One of the vaccines– the one that’s furthest along– what started, actually, at the federal government in our own Vaccine Research Center at NIH– then worked with a biotechnology company called Moderna to get to where we are now, with very impressive Phase I results and getting ready to go into a large-scale trial as early as July. That one, of course, we do have some particular stake in the intellectual property. Others, though, come from companies who’ve invested their efforts into getting them to the point where they might now be ready for a trial,” Collins stated.

“The U.S. government may jointly own a potential coronavirus vaccine. The National Institutes of Health (NIH) has played a critical role in coronavirus research for years. Building off this work, federal scientists have helped design and test mRNA-1273—a vaccine candidate developed in partnership with Moderna.[2] The federal government has filed multiple patents covering mRNA-1273. In this report, we describe two patent applications that list federal scientists as co-inventors.[3] If the government successfully pursued its patent filings, the resulting patents would likely confer significant rights. We also review recently disclosed contracts between NIH and Moderna. The agreements suggest that NIH has not transferred its rights, but instead maintains a joint stake.”

Eight members of the National Institutes of Health (NIH) expert COVID-19 Treatment Guidelines Panel disclosed recent financial relationships with Gilead, the drugmaker that is introducing an expensive Coronavirus competitor to Hydroxychloroquine, the inexpensive anti-malarial drug that President Trump has promoted which many people claim has helped them. This financial relationship between NIH experts and Gilead is especially concerning in light of revelations that NIH has a financial stake in the Bill Gates-funded Moderna vaccine, another competitor to Hydroxychloroquine. Chloroquine critic Dr. Anthony Fauci’s NIAID, which funded the Bat Coronavirus research at the Wuhan Institute of Virology believed to be the source of the outbreak, is part of NIH.

HERE IS THE FINANCIAL DISCLOSURE LIST FOR THE NIH EXPERT CORONAVIRUS TREATMENT PANEL. The experts with disclosed ties to Gilead include consultants, people who provided Gilead research support, and honoraria. Members of the panel also disclosed ties to Merck and INOVIO Pharmaceuticals, which took $9 million from a Gates-backed company to develop a Coronavirus vaccine.

Gilead is driving up their prices from what was previously expected (as the company has done in the past, sparking bipartisan condemnation from Senators Grassley and Wyden). No wonder, then, VA study.

President Donald Trump is now officially vindicated with facts on his support for the anti-malarial drug Hydroxychloroquine.

“Treatment with hydroxychloroquine cut the death rate significantly in sick patients hospitalized with COVID-19 – and without heart-related side-effects, according to a new study published by Henry Ford Health System. In a large-scale retrospective analysis…

“What we’re finding clinically with our patients is that it really only works in conjunction with Zinc,” stated Los Angeles emergency room specialist Dr. Anthony Cardillo. “So the hydroxychloroquine opens a zinc channel, zinc goes into the cell, it then blocks the replication of the cellular machinery….Every patient I’ve prescribed it to has been very very ill and within 8 to 12 hours they were basically symptom free.”

Bill Gates Is Already Looking Forward to The ‘Next’ Pandemic

Bill Gates says ” Prepare for the Next One” https://t.co/35tNYqQGU3 via @YouTube

Fauci Does Not Bother To Wear A Mask In Public, As Evidenced By His Pitiful First-Pitch Showing At Baseball’s Opening Day 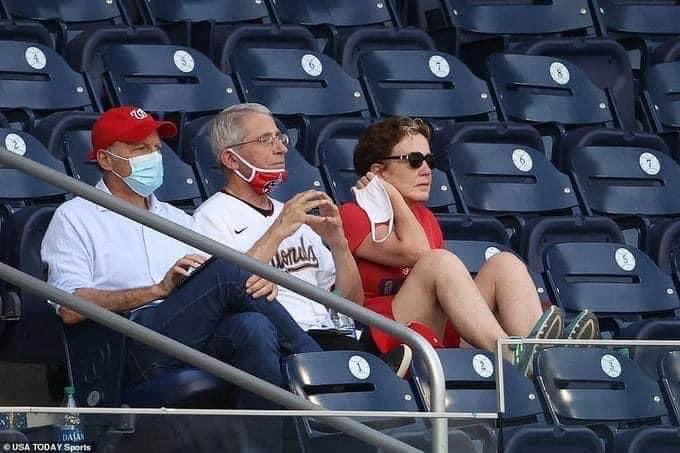 Why did the Bill and Melinda Gates Foundation fund research at MIT on how to implant people’s vaccination history under their skin? Why did Fauci meet with Bill Gates’ father, George Soros, and other globalist heavyweights all the way back in 2001? Why did the Stephen King-created television series The Dead Zone predict the Coronavirus outbreak — and a Chloroquine cure for it — back in 2003?

Why did Dr. Anthony Fauci’s NIAID fund the Coronavirus bat research at the Wuhan Institute of Virology, which President Trump and Secretary of State Pompeo and others have identified as the source of the worldwide outbreak?

WOW: Bill and Melinda Gates Foundation provided funding for this research into storing patient medical information within a person’s skin using a vaccine.

WOW: A high-level source just sent me this photo, says that it shows Dr. FAUCI with George SOROS and Bill Gates’ father among others. Source says it’s from 2001. Fauci identified as man third from the left pic.twitter.com/l1NYyqHSAq