PolitiFact recently rated a photo showing Joe Biden associating with former KKK leader Robert Byrd “mostly false,” in one of the most obvious attempts to keep the Democrat frontrunner clean of scandals.

The reason it was rated mostly false? Because the meme circulating on Facebook got Byrd’s official title wrong – he wasn’t a Grand Wizard, he was an Exalted Cyclops!

The Facebook post, shared by Enlisted Nine Fight Company veteran apparel, shows Joe Biden smiling and raising a fist as he lifts Byrd’s right hand, with text reading, “Biden with Grand wizard of KKK. So who again is playing you, lying to you, using you for the votes, Creators of the KKK, opposed civil right of blacks. Yup thats the Democratic party.”

In their explanation, Politifact admits the picture is an actual AP photograph from Biden’s 2008 run with Barack Obama, but then goes to great lengths to explain the difference between KKK Grand Wizards and Exalted Cyclopses, as if that helps.

In West Virginia in the 1940s — late 1941 or early 1942, according to Byrd’s memoir — he organized and led a 150-member chapter, or “Klavern,” of the Klan as the “Exalted Cyclops.” In Klan hierarchy, according to Slate, each Klavern is led by an Exalted Cyclops typically elected by his fellow Klansmen. The Exalted Cyclops reports to a “Grand Giant” (provincial leader), “Grand Dragon” (state director) and “Grand Wizard” (national chair).

Politifact even highlights past racist statements made by Byrd, including one 1946 letter in which he wrote to a Grand Wizard, “the Klan is needed today as never before, and I am anxious to see its rebirth here in West Virginia,” 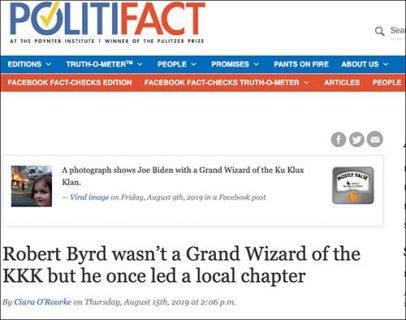 and another letter from 1945 he sent to a fellow Democrat, in which he wrote,

“Rather I should die a thousand times, and see Old Glory trampled in the dirt never to rise again, than to see this beloved land of ours become degraded by race mongrels.”

Despite all that, Politifact reasoned the meme was “mostly false” because it “exaggerates Byrd’s role in the KKK,” and because he was largely repentant and remorseful of his past transgression.

In the 1940s, Byrd organized and led a local Klan chapter as its Exalted Cyclops, but he wasn’t a Grand Wizard. And he ultimately renounced his views from that period of his life though his past and former ties to the KKK were raised throughout the rest of his life.

By the time this photo of Byrd and Biden was taken, Byrd’s public expressions of regret and shame over his earlier involvement in the KKK was well-documented and often-repeated.

Keep in mind Politifact is one of the organizations, along with Snopes and others, hired on by Facebook to fact-check memes and stop the spread of fake news on social media.