Symbolism observed in the 2012 Olympics opening ceremony appears to show eerie similarities to the current coronavirus pandemic, many on social media are claiming.

The elaborately choreographed ceremony during the 2012 Olympics in London featured dozens of nurses, hospital beds and patients, in what was billed as a celebration of the UK’s National Health Service.

One section of the routine featured nurses dancing and putting children to bed ahead of a dark sequence, narrated by Harry Potter author J.K. Rowling, where demons emerge along with many villains from English literature.

But the ceremony’s theme has taken on a new dimension in the age of coronavirus, with some claiming the dance routine was deliberate predictive programming meant to foreshadow the pandemic that would sweep the globe 8 years later.

This is the London Olympics 2012 opening ceremony.

This is from the 2012 Olympics in the UK. Knowing what we know now, take a look… It was literally a mass ritual spellcasting event.#SaveTheChildren pic.twitter.com/4hWhiTlFnS

…knowing what we know now.

Symbolism will be their downfall! pic.twitter.com/KO5Q0a2HZc

Remember the 2012 olympics with the dancing nurses and when they made the stadium look like the covid logo 🤔🤔🤔#covidhoax pic.twitter.com/oGHCUu2jct

Several noted one of the characters closely resembled current UK Prime Minister Boris Johnson, who was coincidentally stricken with coronavirus mere weeks ago.

Others pointed out an aerial view of the Queen Elizabeth Olympic Park stadium appears to resemble the shape of the COVID-19 novel coronavirus molecule, not to mention the stadium’s pyramid shapes which at times resemble the nefarious all-seeing eye. 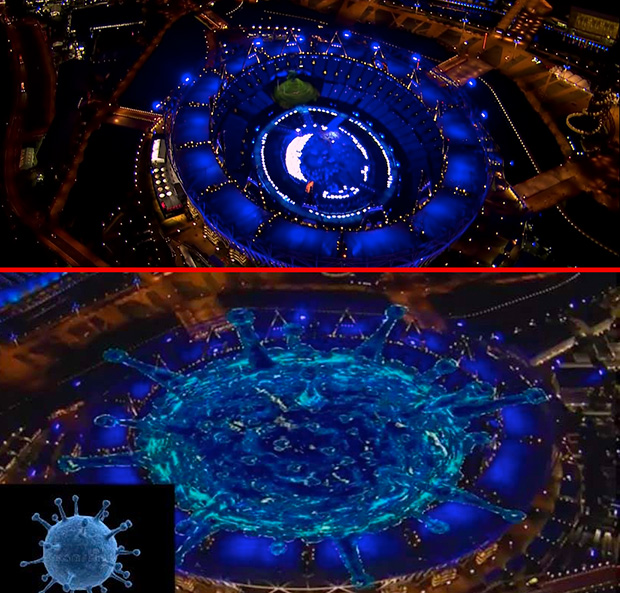 What do you think? Was the ceremony proof a deliberate predictive programming mind control device attempting to introduce the images we’re currently seeing unfold before us, or was it simply an innocent dance routine?

Check out the ceremony below:

During the press conference today with the Coronavirus Task Force, a hot mic caught a reporter commenting on the actual studies.