A Philadelphia 76ers fan says he was tossed out of a preseason game after showing their support for pro-democracy protesters in Hong Kong, according to NBC Philadelphia.

Sam Wachs and his wife brought signs which read “Free Hong Kong” and “Free HK” to Tuesday night’s game between the Sixers and the Guangzhou Loong-Lions of the Chinese Basketball Association. According to Wachs, he lived in Hong Kong for two years and supports the anti-government movement.

“We were just sitting in our seats near the Chinese bench,” said Wachs.

As they were sitting, Wachs said security confiscated their signs. He then said they were kicked out of the game during the second quarter by security after they yelled, “Free Hong Kong.”

The alleged incident is the latest in a string knee-bending to communist China after the NBA lost nearly all of its Chinese sponsors after a now-deleted pro-Hong Kong tweet by Houston Rockets general manager Daryl Morey triggered Beijing.

The National Basketball Association lost almost all of its major Chinese sponsors in the country, the league’s biggest market outside the U.S., as the government flexes its economic muscle after a tweet backing Hong Kong’s protesters triggered a backlash.

A local joint venture of Nissan Motor Co. was the latest to distance itself from the U.S. league, joining China’s largest sportswear maker, the second-biggest dairy firm and a smartphone brand who all said they were pulling out. State television CCTV and tech giant Tencent Holdings Ltd. said Tuesday they won’t show NBA’s pre-season games.

In the latest China controversy involving the basketball organization, Beijing is resorting to a time-tested strategy of targeting businesses it deems to challenge its political interests — especially those questioning its sovereignty over certain territories. The furor, triggered by last week’s tweet by an official with the Houston Rockets, has imperiled the NBA in a multibillion-dollar market. –Bloomberg

“Beijing takes a zero-tolerance attitude to any perceived foreign interference in its internal affairs,” said said Hugo Brennan, principal Asia analyst at global risk consultancy Verisk Maplecroft (via Bloomberg), adding “This explains why it is adopting such a hard-line stance.”

Perhaps that explains why Rockets star James Harden was forced to grovel for yuans profusely apologized in an awkward on-camera moment; proclaiming “we love China” while standing next to All-star teammate Russell Westbrook. “For both of us individually, we go there once or twice a year. They show us the most important love,” he added.

The pro-Hong Kong controversy comes as the NBA embarks on what was supposed to be a key week for the organization in China – with exhibition matches scheduled for the Brooklyn Nets (recently bought by Alibaba co-founder Joe Tsai, notes Bloomberg), who will face the Los Angeles Lakers in an Oct. 12 exhibition match in Shenzhen – near the border with Hong Kong.

At this point, the game may be off due to the controversy despite both teams already being in Shanghai. Scheduled Wednesday press conferences were postponed “given the fluidity of the situation,” according to the league.

A Wednesday evening “fan night” featuring NBA players and Chinese pop stars was canceled after local celebrities decided to pull out of the event.

Workers were seen stripping a giant NBA banner in a mall in downtown Shanghai, while state-run CCTV said the league should apologize to Chinese fans and withdraw its comments. Some users demanded refunds from Tencent for their NBA subscriptions after the blackout of the preseason games.

After Silver’s comments, China’s state television network CCTV said in a WeChat post that he should sincerely apologize for the Chinese fans for “false comments that offended China.”

Meanwhile, as The Onion satirically reports: 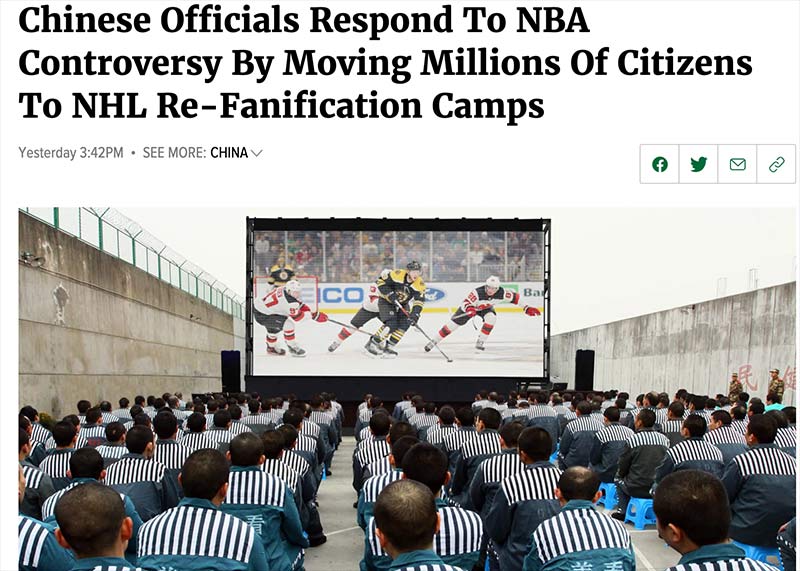 BEIJING—On the heels of recent pro-Hong Kong comments by Houston Rockets GM Daryl Morey, Chinese officials responded to the criticism Tuesday by moving millions of Chinese citizens to NHL re-fanification camps. “To show that China will not tolerate this flagrant disrespect for our nation amongst the ranks of the NBA, we intend to enlighten our citizens in the ways of the National Hockey League,” said Vice Premier Han Zheng, overseeing the first of many re-fanification ceremonies in a detention center outside of Beijing where citizens were encouraged at gunpoint to throw NBA merchandise into bonfires and subsequently issued compulsory Sidney Crosby jerseys, posters of the Toronto Maple Leafs, and Blu-ray copies of The Cutting Edge. “With this action, we will undo the harmful legacy of basketball on our nation’s psyche, using unyielding exposure to the ways in which hockey aligns with the values of China, a dynasty not unlike that of the Boston Bruins. By the time our citizens board their trains back home, they will not remember that such a thing as the NBA ever existed. All they will know is the joy of a slapshot, the grace of a goalie, and the unlimited potential of the St. Louis Blues in the postseason.” At press time, sources confirmed that officials were forcing unpaid re-fanification camp labor to construct hockey arenas nationwide.

Alex Jones breaks down the entertainment and media industry in America being taken over by the Chinese, as is apparent in the NBA’s recent groveling for daring to support liberty for the people of Hong Kong.