Despite nations all over the world beginning to isolate from the UK, banning travel to and from Britain, and effectively cutting it off, the infection rate is LOWER there than several other countries.

As noted by the Daily Mail, infection rates in Britain are still lower than in Sweden, Denmark, Croatia and Holland. 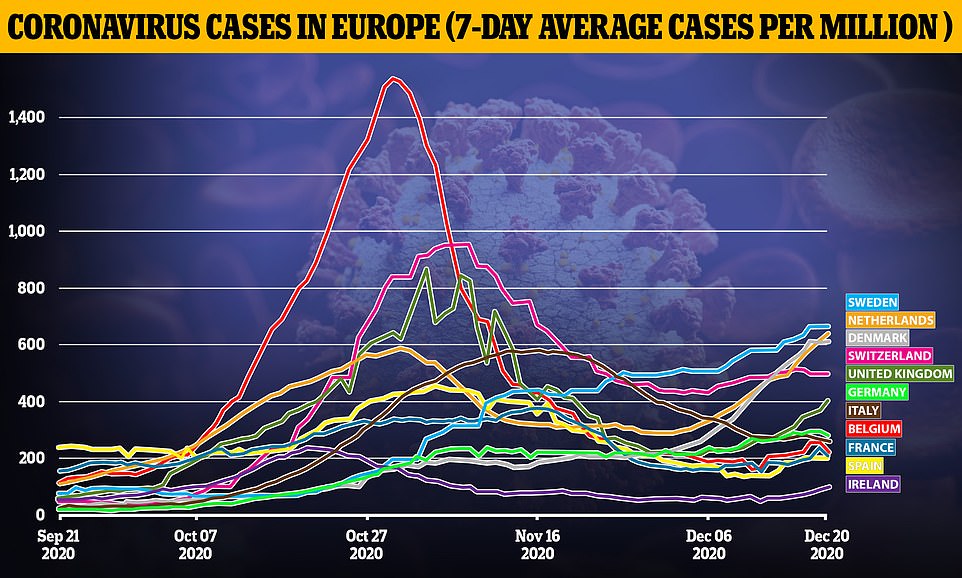 Nevertheless, these countries are isolating themselves from the UK after the government there hyped a ‘mutant strain’ of COVID to justify another lockdown, without presenting any evidence.

Footage has emerged of British travellers being detained in foreign airports and tested for COVID against their will.

Meanwhile, the British government has not closed its borders to any incoming flights at all:

There are now fears that there will not be enough food on the shelves in shops to sustain the British population:

Meanwhile, five other countries say they have already detected instances of the ‘mutant strain’, which is claimed by the UK government to be 70% more contagious.

Italy, Denmark, the Netherlands, Australia and Belgium all say they have experienced cases dating back to November.

Scientists working with the government in Britain also claim that the new “supercharged” strain was present in Brazil EIGHT MONTHS AGO.

“Studies show that the mutation, called N501Y, was spotted in the South American country in April, before later rearing its head again in Australia and the US,” The London Telegraph reports.

The report further notes that “Leading scientific advisers explained that the N501Y did not cause much alarm earlier in the year, because it failed to rip through populations on its own”.

The strain is thought to have been spreading in the UK since September, but only now, days before Christmas, and after parliament has broken for the holiday, has the government spoken about it.

Scientists in Britain also state that “The hint to look for the N501Y came from [scientists] who were tracking this mutation in South Africa.”

“Both the British and South African variants share the N501Y mutation, but appear to have evolved independently of one another,” the report adds.

South Africa’s health minister suggested on Friday that the new strain present there, called 501.V2, seems to have a more severe effect on young people.

Scientists independent of the government are asking to see the evidence that the new strain is as contagious as it has been labeled, with Carl Heneghan, Professor of Evidence Based Medicine at Oxford University’s Nuffield Department of Primary Care, expressing scepticism over how the government reached the 70 per cent figure.

“I’ve been doing this job for 25 years and I can tell you can’t establish a quantifiable number in such a short time frame,” Heneghan said.

“Every expert is saying it’s too early to draw such an inference,” the professor added.