Thanks to enhanced imaging analysis techniques, researchers have discovered that the ice on Saturn’s moon Enceladus is fresh and regenerates, providing new insights into processes in our solar system.

Just a small shift in wavelength, from optical to infrared, reveals an astounding sight on the moon; glistening, fresh ice caps, which contrast with the pockmarked and scarred surface, riddled with chasms, gorges and other geographic blemishes. 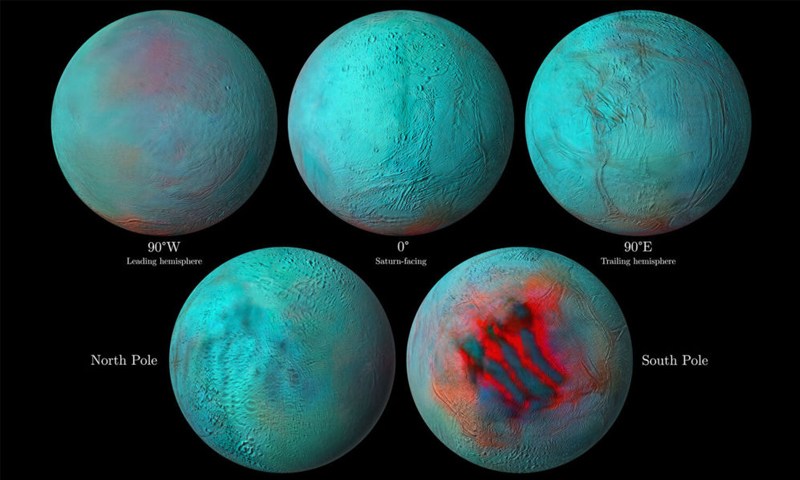 A team led by Rozenn Robidel of the University of Nantes in France analyzed images, captured by the Cassini space probe during 23 close flybys, and found that some process keeps regenerating the ice across the lunar surface.

Despite the fact that the Cassini mission ended in September 2017, the data is still being pored over by experts, yielding startling, and beautiful, discoveries. Furthermore, when the team looked even closer at the data, they noticed that the ice itself was crystalline and not amorphous as they had expected.

Cassini previously discovered plumes of salt water shooting out of four parallel gorges on the moon’s south pole, known as the ‘tiger stripes.’

As Enceladus orbits around Saturn, the planet’s tidal forces pull and stretch the moon, creating a variety of fissures, cracks and assorted canyons and gorges, while also producing geothermal heat which spews forth from the south pole in the form of heated water vapor.

This vapor, in turn, freezes in the atmosphere and forms the fresh sheets of ice across the surface, creating this persistent resurfacing effect.

Crystalline ice is rarely found in the cold, inhospitable wilderness of space, as it requires warmer temperatures than you’d find beyond Earth; a relatively warm ~110 Kelvin (-163 Celsius, -261 Fahrenheit). At these temperatures, water molecules retain enough energy to keep a crystalline form rather than an amorphous blob of ice which is what we usually find in space, thanks to more extreme cold temperatures.

Furthermore, the spectral signature of crystalline ice was found across the globe, not just in the regions near the so-called ‘tiger stripe’ geysers at the south pole, indicating that the process is ongoing and somewhat predictable.

The team will apply all they have learned to the upcoming Juice and Europa Clipper missions, which will study Jupiter’s icy moons Ganymede and Europa.

Our political climate has levied a lopsided justice system to the point that Jake Gardner, a Nebraska bar owner chose to commit suicide rather than face prison for defending his life, liberty, and property.