“YouTube doesn’t allow content that explicitly disputes the efficacy of the World Health Organization (WHO) or local health authorities’ recommended guidance on social distancing and self isolation that may lead people to act against that guidance,” reads a statement from YouTube regarding the censorship. 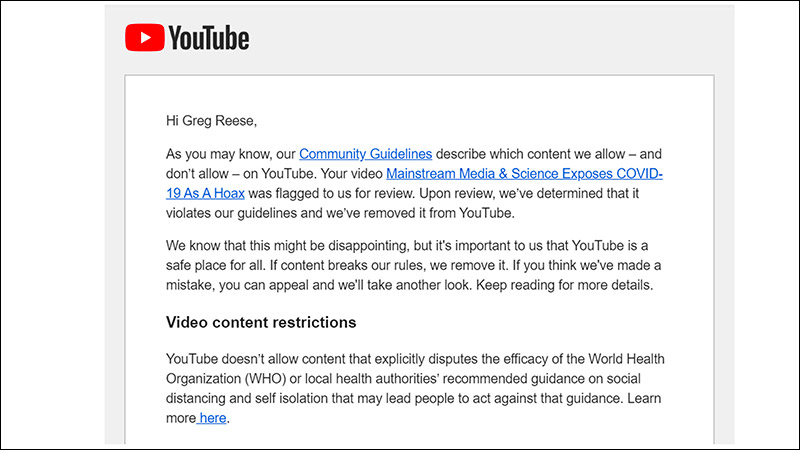 In the video, Reese discusses a 2010 Forbes article titled “Why The WHO Faked a Pandemic,” which breaks down how the World Health Organization in 2010 attempted to stage a fake Swine Flu outbreak, with scientists describing the “false pandemic” as “one of the greatest medicine scandals of the century.”

The article explains how WHO was able to fake the pandemic by changing the definition to “eliminate severity as a factor.”

“You could now have a pandemic with zero deaths,” Forbes reported at the time.

As various other articles cited in Reese’s report are equally damning to the ongoing COVID health crisis narrative, it’s no wonder YouTube has had to censor the video as a means of bolstering the WHO’s and the CDC’s credibility.

Check out Greg’s other incredible report: The Truth Behind The Mask