Prosecutors overseeing the case of former US Treasury Department staffer Natalie Edwards, who pleaded guilty to one count of conspiracy on Monday, just happen to be Deep State swamp creatures.

Appearing before a Manhattan federal court, Edwards admitted to leaking classified documents regarding the Mueller investigation to a Buzzfeed reporter.

According to the DOJ, Edwards provided the reporter with information pertaining to, “among other things, Paul Manafort, Richard Gates, the Russian Embassy, Mariia Butina, and Prevezon Alexander.”

Edwards saved Suspicious Activity Reports (SARs), and thousands of other files containing sensitive government information, to a flash drive provided to her by the Treasury Department.

Next, Edwards sent the SARs to the Buzzfeed reporter by taking photographs of the documents and texting the images over an encrypted messenger app.

On Monday, the DOJ announced the names of the three prosecutors in charge of the case.

Assistant U.S. Attorneys Kimberly J. Ravener, Daniel C. Richenthal, and Maurene R. Comey were all selected to oversee the prosecution of Edwards, however, they might be inclined to go easy on her due to their left-leaning political beliefs.

Kimberly Ravener was formerly employed by the Consumer Financial Protection Bureau (CFPB), which was a government agency established by Elizabeth Warren and allegedly used to skim taxpayer money for the benefit of the Democratic Party.

In 2018, Paul Sperry of the New York Post reported on the agency’s corruption and allegiance to the Democratic Party.

Richenthal’s wife, Alixandra Eleis Smith, was a prosecutor on the Martin Shkreli case and was a law clerk for Democrat Judge Julio M. Fuentes, who was appointed to the Third Circuit by Bill Clinton.

The third prosecutor, Maurene R. Comey, is none other than the daughter of disgraced FBI Director James Comey.

Perhaps not so coincidentally, Ms. Comey was also the lead prosecutor in a Jeffrey Epstein sex trafficking case.

According to Business Insider, Maurene Comey’s only political donation ever was to Hillary Clinton and her father James once told ABC “that his wife and daughters ‘marched in the ‘Women’s March’ the day after President Trump’s inauguration,’ and that he was ‘pretty sure’ they all ‘wanted Hillary Clinton to be the first woman president.’”

Below is a picture from the march: 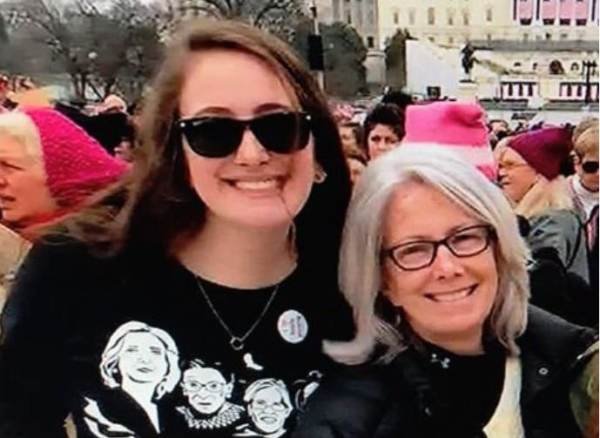 With a group of prosecutors who share a disdain for President Trump, can the American people expect anti-Trump leaker Natalie Edwards to be properly punished?