Texas Attorney General Ken Paxton is calling on more law-abiding citizens to legally carry firearms in order to prevent massacres by armed criminals in the wake of Sunday’s tragic shooting at a church in his state.

Following the stunning gun battle that unfolded after a would-be mass killer opened fire at West Freeway Church of Christ in White Settlement, Texas, AG Paxton appeared on CNN to praise the “heroic efforts” of armed parishioners who confronted and killed the shooter.

“What I will say is they were heroic efforts,” Paxton said. “I have been saying this for years: we need to make sure that people can protect themselves because oftentimes law enforcement can’t react quickly. They can’t be there in seconds when these shooters are suddenly shooting.”

“It really is a remarkable thing these people reacted so quickly and saved the lives of the other 239 people in that congregation.”

In response, CNN host Jessica Dean pressed Paxton to discuss “what else can be done” to “stop gun violence in this country,” in an apparent attempt to shift the conversation to gun control.

“The reality is, I think our laws in Texas allow us to protect ourselves,” Paxton responded. “More people need to carry in our state — in our churches and places of business, so that if something like this horrible thing does happen, at least we have people that can react and save the lives of those around them.”

“There’s always discussion about imposing more gun restrictions. The reality is that somebody like this, who is willing to kill somebody, is unlikely to follow a gun law. So we need to continue to be vigilant and we need to allow our citizens to protect themselves — exactly what happened today, and I’m so grateful for the quick reaction because with what happened in other churches about a year ago, in other places around my state, when people were not armed, we had a lot more people die.” 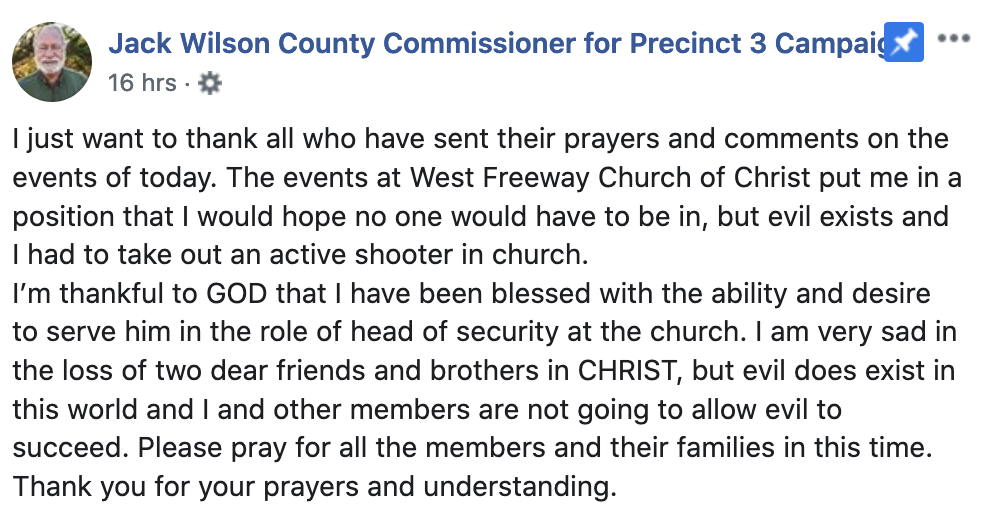 Wilson, who is a former deputy sheriff and current candidate for county commissioner, has been hailed as a hero.