Doubting the accuracy of State of Texas Covid-19 numbers, Collin Co., Texas, dropped its active case numbers from over 4600 to under 100 overnight after an audit.

Earlier this month, Collin Co.’s ‘Covid-19 Dashboard’ claimed over 4600 active cases in the county based on data provided by the Texas Dept. of State Health Services, prompting county officials to question the accuracy of the data because, presumably, the county’s hospitals weren’t overloaded. 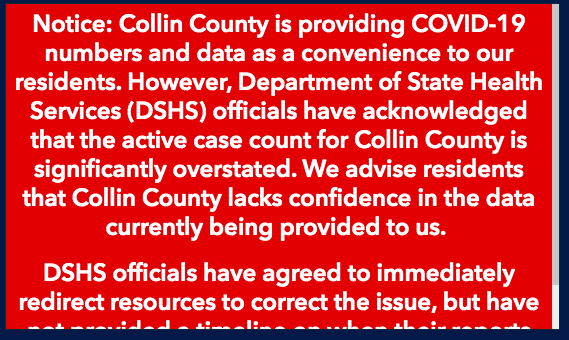 “Collin County is providing COVID-19 numbers and data as a convenience to our residents, however, Department of State Health Services (DSHS) officials have acknowledged that the active case count for Collin County is significantly overstated,” reads a disclaimer on the county’s web site. “We advise residents that Collin County lacks confidence in the data currently being provided to us.”

“DSHS officials have agreed to immediately redirect resources to correct the issue, but have not provided a timeline on when their reports will be corrected.”

Compare that to the revised active cases on Aug. 26 of just 81:

It appears most of the active cases were recalculated as ‘recovered:’

According to the Community Impact newsletter:

County Judge Chris Hill said he has had “significant conversations” with DSHS officials about their plans to address issues raised by commissioners. After the revision to the disclaimer was approved, Hill explained DSHS planned to set up a Collin County work group Aug. 25 that will be committed to rectifying the county’s backlog of cases.

The “work group” consists of 12 private contractors performing an audit of the data.

State officials claimed the inaccurate numbers were due to a “backlog” that had “recently included some older cases,” a misleading statement given that Collin Co. active case numbers were apparently overstated by over 5600%.

In short, “some older cases” doesn’t explain the difference between 81 and over 4600.

The DSHS data is what Texas Gov. Greg Abbott relied on when he pushed face mask wearing, business shutdowns and ‘social distancing’ across the state.

According to an Aug. 16 article by the El Paso Times:

“Listen, there’s a reality: People have had an altered state of life for the past few months. One that requires wearing a mask. One that requires staying at home if at all possible. One that reduces your level of [activity] with others,” Abbott said. “That’s a challenge, a once in a lifetime challenge, and it’s easy to get a sense of fatigue. It’s easy to want to stop having to comply with those standards.”

As of Thursday, the Texas Department of State Health Services was reporting 513,575 coronavirus cases in Texas, with an estimated 128,526 active cases. The state reported 9,289 fatalities.

This Aug. 16 active case number is now suspect given the recent revision by Collin Co.

Thanks to the brave journalists who filmed this footage.