Billionaire and convicted pedophile Jeffrey Epstein hatched a scheme involving eugenics and transhumanism to “seed the human race with his DNA” by systematically impregnating women at his New Mexico compound.

Several scientists spoke to The New York Times to detail run-ins they had with Epstein at dinners and events in their attempts to acquire start-up money for their scientific projects, and according to them, Epstein was fascinated with eugenics, transhumanism, artificial intelligence, and cryogenics. 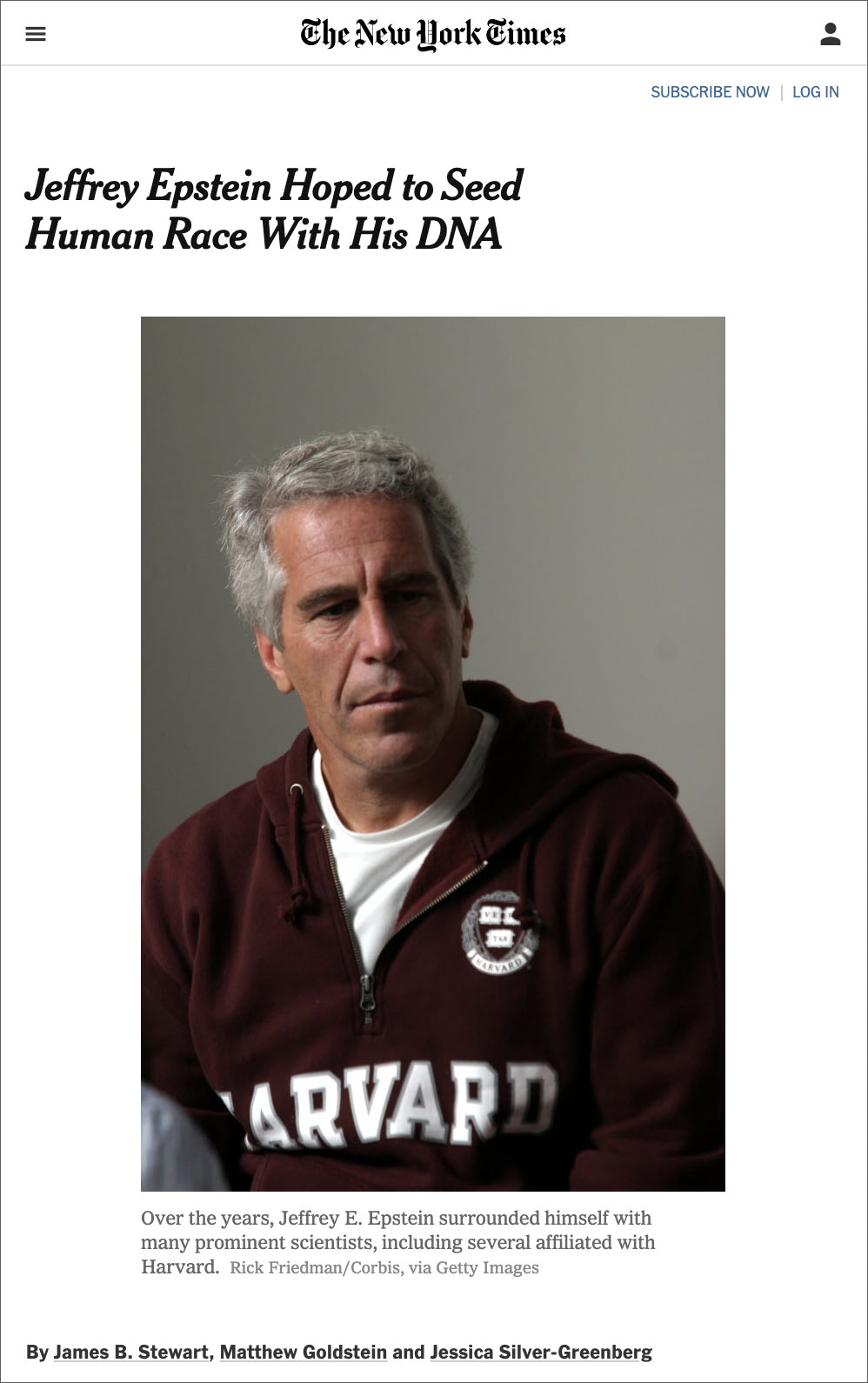 “On multiple occasions starting in the early 2000s, Mr. Epstein told scientists and businessmen about his ambitions to use his New Mexico ranch as a base where women would be inseminated with his sperm and would give birth to his babies, according to two award-winning scientists and an adviser to large companies and wealthy individuals, all of whom Mr. Epstein told about it,” The Times reported Wednesday.

Jaron Lanier, a virtual reality expert, details a dinner conversation his colleague had with Epstein over his baby-farming plot, which other scientists called “far-fetched and disturbing.”

“Once, at a dinner at Mr. Epstein’s mansion on Manhattan’s Upper East Side, Mr. Lanier said he talked to a scientist who told him that Mr. Epstein’s goal was to have 20 women at a time impregnated at his 33,000-square-foot Zorro Ranch in a tiny town outside Santa Fe.”

“According to Mr. Lanier, the NASA scientist said Mr. Epstein had based his idea for a baby ranch on accounts of the Repository for Germinal Choice, which was to be stocked with the sperm of Nobel laureates who wanted to strengthen the human gene pool.”

Lanier went on to say that “he had the impression that Mr. Epstein was using the dinner parties — where some guests were attractive women with impressive academic credentials — to screen candidates to bear Mr. Epstein’s children.”

Epstein also wanted to pursue other strange scientific endeavors, like identifying some sort of particle that triggers the feeling of being watched.

“Mr. Epstein was willing to finance research that others viewed as bizarre. He told one scientist that he was bankrolling efforts to identify a mysterious particle that might trigger the feeling that someone is watching you.”

“At one session at Harvard, Mr. Epstein criticized efforts to reduce starvation and provide health care to the poor because doing so increased the risk of overpopulation, said Mr. Pinker, who was there.”

One “adherent of transhumanism” even told The Times that Epstein “told this person that he wanted his head and penis to be frozen.”

As Alex Jones and Infowars have exhaustively reported, this is what the elite are into — their religion is transhumanism, eugenics, and depopulation to create their ultimate breakaway civilization.