A Michigan father refused to attend his own son’s wedding after learning it would be MAGA-themed.

The couple, Audra Johnson and her husband, celebrated the event in Kalamazoo on the Fourth of July.

Johnson even painted her nails to salute the American flag. 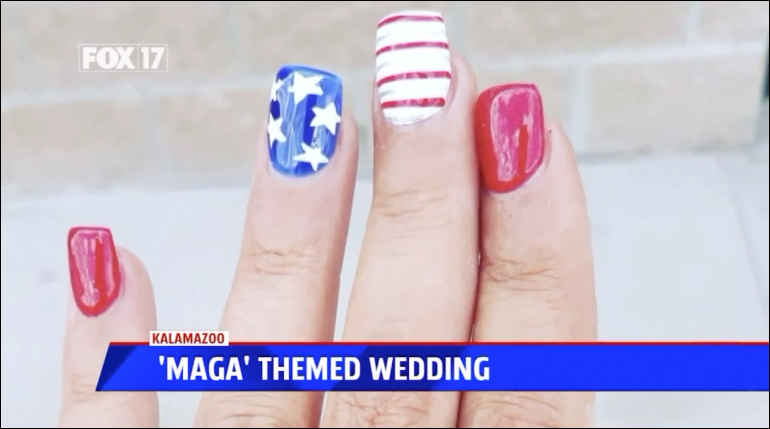 “It looked like America threw up all over my wedding and I’m not sorry,” Johnson told local media.

The event was open to people of all political ideologies, including Democrats, of which Johnson’s maid of honor was one.

“We were gonna do our photos with the Trump hats and she said, ‘You know I love you, but I can’t wear the Trump hat,'” Johnson told WXMI. “I said, ‘It’s OK. It’s OK. Just wear a red hat. We still love you. We can have completely different opinions about everything and still love each other.”

But not everyone was happy with the pro-Trump festivities.

Johnson says while she’d be open to attending an Obama-themed wedding, her husband’s father refused to come, calling the president a “racist.”

“He sent us a text message,” the new wife admitted. “It said, ‘As long as you support that racist in the White House, I won’t be attending your wedding.’ Which is sad but we did have a lot of people that loved us and showed up.”

Unfortunately, the groom’s dad missed one key point the wedding was trying to convey.

According to Johnson, her wedding was partially intended to dispel the idea that Trump supporters are racist: “I really feel like because we are such a mixed family – you know, he’s African American, I’m Filipino – I thought it was really important to show people that the stereotype, you know that the whole ‘Trump supporters are racist,’ stuff like that, we both thought it was really important to show that was wrong.”