A Vox journalist went through and counted the number of times the word “fuck” was used in a clip from Curb Your Enthusiasm recently tweeted out by President Trump.

On Monday night, the president surprised many when he tweeted a clip from episode 1 Season 10 of HBO’s hit show starring Seinfeld creator Larry David, in which the show’s protagonist realizes the power of the red MAGA hat.

“TOUGH GUYS FOR TRUMP!” Trump wrote in the tweet, accompanied by a clip where David defuses an angered motorcyclist, who he accidentally cut off on the highway, by apologizing while wearing the MAGA hat.

The tweet was hailed as one of Trump’s greatest trolls, especially given the show’s creator, who portrays Democrat socialist Bernie Sanders on Saturday Night Live, is no Trump supporter.

However, for one Vox journalist it was too much, and he counted every single time the word “fuck” was used in the clip in an attempt to argue sharing the video was somehow beneath the office of the president.

“The president of the United States posts a 28 second clip in which the word ‘fuck’ is used seven times,” said Vox writer Aaron Rupar. 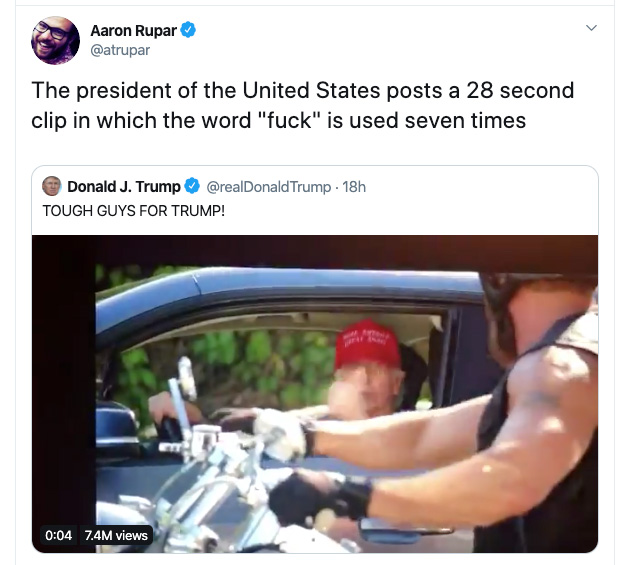 Twitter users mocked Rupar, asking if he would be okay, among other criticisms.

Libs reacting to someone in a video cursing: pic.twitter.com/B1E1b5cif9

Oh NO! Trump shared a video with the F word…….😬

I am so sorry this is happening to you

You mean like the left uses the word against POTUS45 and his followers 24/7⁉️
Thank leftists for the lack of shock from words like this of course unless their opponents use them. 🥴

Time to get offended!🤣 pic.twitter.com/LqBfCsTDYh

Wow let’s impeach him for that https://t.co/earzvwncFW

The problem is Trump’s office is oval, so there’s no way to make him stand in the corner for this. Smh. https://t.co/WTP74Lo9BZ

While pretending to clutch his pearls over the President’s naughty language, a past tweet from Rupar, meanwhile, shows he watches Curb Your Enthusiasm and describes it as “great stuff.”

Infowars’ Kaitlin Bennett asks Trump supporters how they feel when wearing a MAGA hat in public.