Twitter suspended the accounts of Infowars reporters Owen Shroyer and Rob Dew Thursday, after a Media Matters hit piece claimed the social media platform was “facilitating” the promotion of a rally at the Texas capitol this weekend.

The suspensions came mere hours after a Media Matters article questioning whether a recent Periscope livestream, in which Shroyer promoted an upcoming Reopen America rally in Austin set for Saturday, violated the company’s guidelines on content that “could place people at a higher risk of transmitting COVID-19.” 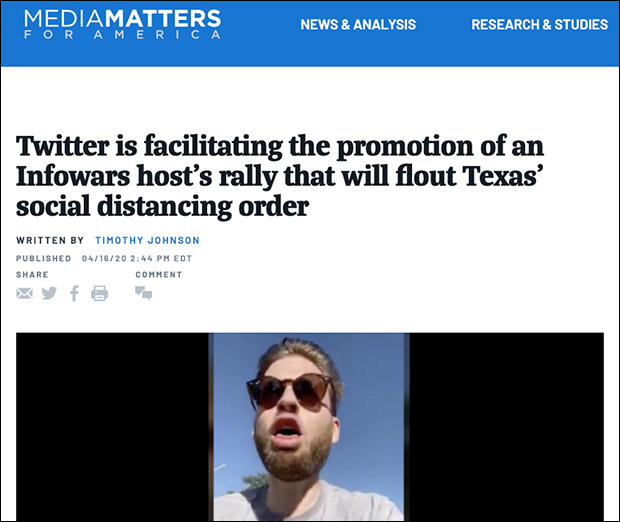 Twitter users expressed shock and dismay at the censorship efforts, with media commentator Mark Dice among the first to connect Media Matters with the suspensions:

So whose feelings did Owen Shroyer (@allidoisowen) hurt to get banned?

“It’s sad that they would start censoring people in the middle of a global pandemic,” Shroyer said in an exclusive statement.

“You’d think it goes against everything they’ve been saying, yet if they really wanted to do something about the spread of the coronavirus you’d think they’d want to be calling out China and the World Health Organization, but they’re not doing that – their propaganda continues to spread on Twitter.”

“I don’t think it was about that though… I think this was about the ‘Pedogate 2020’ documentary that I shared twice but as Kaitlin Bennett put out, this is clearly nothing to do with abusive behavior, because they allow death threats to happen to her everyday, but then they censor my account for either covering coronavirus or daring to do a livestream, or daring to share a documentary.

“So this is just more Nazi-style censorship from the technocrat left and Nazis at Twitter.”

Despite the Twitter account suspensions, the “You Can’t Close America” rally is set for Saturday, April 18th, 2020 from 12PM-2PM Central, on the steps of the Texas capitol.

The demonstration aims to give Texans of all stripes a voice to protest the authoritarian lockdown orders being imposed by petty tyrants at the local level.

Shroyer (@allidoisowen) is the host of Infowars’ daily afternoon program War Room, which was previously co-hosted by none other than former Trump adviser Roger Stone.

Reopen America protests have hit Texas as citizens from all over the state spent the afternoon protesting required face masks, economic shutdown and unconstitutional state mandates. The police were also in attendance, issuing a warning to a protester for honking her horn too loudly.