Twitter has suspended prominent gun-rights activist and researcher, John R. Lott Jr over a Tweet about the New Zealand mass murder that killed a group of Muslims as they attended Mosque. 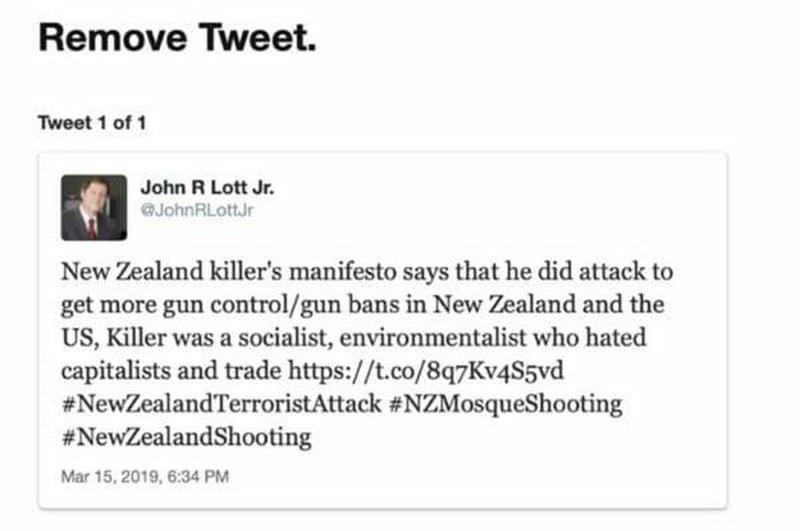 Lott is the founder and president of the Crime Prevention Research Center (CPRC). The CPRC is a registered non-profit that researches the relationship between laws regulating guns and gun ownership and crime. He is the author of nine books including “More Guns, Less Crime,” “The Bias Against Guns,” and “Freedomnomics.” and others. He holds a Ph.D. in economics from UCLA.

When Lott logged onto Twitter, the platform greeted him with a message stating that one of his Twitter posts violated the company’s rules although the social media platform did not list and the exact reason why the Tweet violated their terms of service. The tech giant hasn’t responded to Lott’s appeal as of this writing.

.@Twitter locked @JohnRLottJr‘s account for tweeting about the NZ mosque killer. The killer’s manifesto does state he did the attack b/c it would lead to more gun control & he is a socialist, environmentalist, who hates capitalist & free trade.
details:https://t.co/g6tNi8e2j5 pic.twitter.com/pIVtBmMLXk

The Tweet that Twitter flagged was from March 15th of this year. It is unclear whether the tweet was flagged manually or by machine learning. Google has come under fire recently for a Project Veritas Investigation that showed the tech giant allegedly rigging their algorithmic software to help left-wing presidential candidates. Since this Tweet is almost four months old it seems likely this was flagged manually.

Twitter claims that they do not use political affiliation when enforcing their rules. That is at odds with their actions such as when Twitter removes groups like the Proud Boys, but organizations like Rose City Antifa, the group that attacked police and journalist in Portland, OR last weekend, still are free to use the platform to organize their violent protest.

When AmmoLand News reached out to Twitter to see why the company decided to ban the Proud Boys but let Rose City Antifa operate on their site, Director for Global Policy Communications, Ian Plunkett, stated that the Marxist group was “not currently in violation of our policies.”

Twitter did not give AmmoLand News an exact reason why Lott’s account was locked, but in the statement that Twitter gave to AmmoLand, it seems like the Social Media company is accusing Lott of glorifying violence.

AmmoLand’s follow up questions to Twitter about how exactly Lott’s Tweet glorified violence were not returned. The company also did not explain how his Tweet differs from reports by NBC, CBS, New York Times, various other news organization. Lott’s Tweet was factually accurate and easily verifiable.

This article first appeared at AmmoLand.com.