On Sunday, Deegan, who did not race this weekend, posted the photo capturing the moment she met with Trump, grinning widely, and his wife Melania at the 62nd annual Daytona 500. 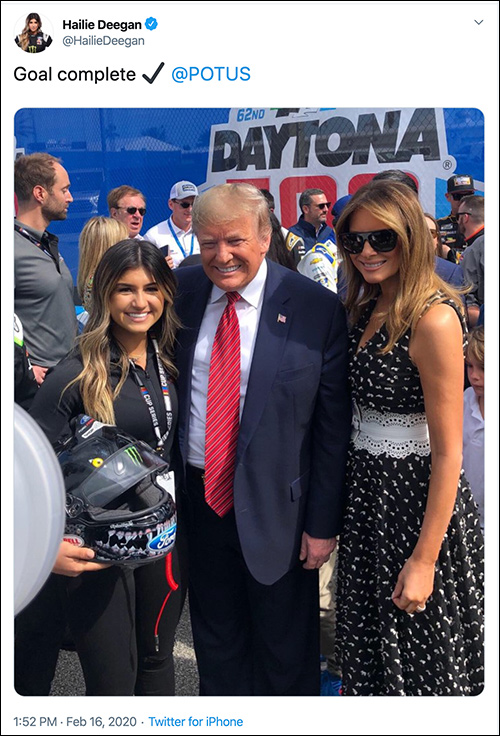 Moments later, users began noticing Twitter was marking the photo “sensitive.” This means some users would have to click “View” or “Show Media” to see Deegan’s photo.

Twitter has marked this picture as “sensitive” because they hate America. pic.twitter.com/iY6l9evfOi

The only thing here that is “sensitive” is twitter https://t.co/sY90Mawc8q pic.twitter.com/eA9AB2PRVs

Deegan’s tweet was still tagged “sensitive” as of writing. 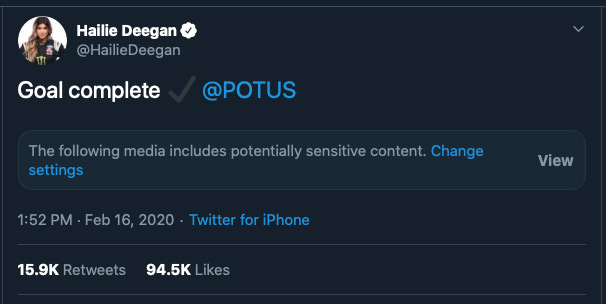 The photo was organized with a little help from the president’s son.

After the president indicated he’d be at the Daytona 500, Deegan tweeted early Sunday morning her goal was to get her helmet signed by the president.

Today’s goal. Get my helmet signed by Trump https://t.co/5v9y2vrjPg

The president’s eldest son, Donald Trump Jr., caught wind of Deegan’s tweet and helped make the goal a reality, telling her, “DM me… I may know someone.”

DM me… I may know someone. https://t.co/bJoxmZFP73

President Trump was named grand marshal of the Daytona 500, and opened the event by announcing, “Gentlemen, start your engines.”

Why is it important that President Trump became only the second U.S. President to attend the Daytona 500 and the first in its 61 year history to serve as the Daytona 500 Grand Marshal? Because, the elite pond scum drunk with power must understand that regular Americans will not go quietly into the dark night of liberal lunacy.