Update: The Chair of the Joint Chiefs of Staff Gen. Mark Milley addressed the letter in question and its authenticity, confirming it was real but was a “poorly worded” and unsigned “draft.”

“That letter is a draft. It was a mistake, it was unsigned, it should not have been released … (it was) poorly worded, implies withdrawal, that is not what’s happening,” Milley said.

“It’s an honest mistake … it should not have been sent,” he added.

Defense Secretary Mark Esper also came out to dispute the letter, saying the Pentagon has no intention of withdrawing from Iraq.

“There’s been no decision whatsover to leave Iraq,” Esper said. “There’s no decision to leave, nor did we issue any plans to leave or prepare to leave.”

“The long and the short of it is, it’s an honest mistake,” he added.

The U.S. Army has told the Iraqi military that it intends to withdraw its forces from Iraq indefinitely out of respect for the nation’s sovereignty — a total inversion of the last 20 years of U.S. foreign policy.

In a Department of Defense letter sent to Iraq’s Ministry of Defense, the U.S. Army outlined upcoming steps it would take to “move out” forces from the country, assuring them that the withdrawal will be done swiftly and in a manner that doesn’t frighten the public. 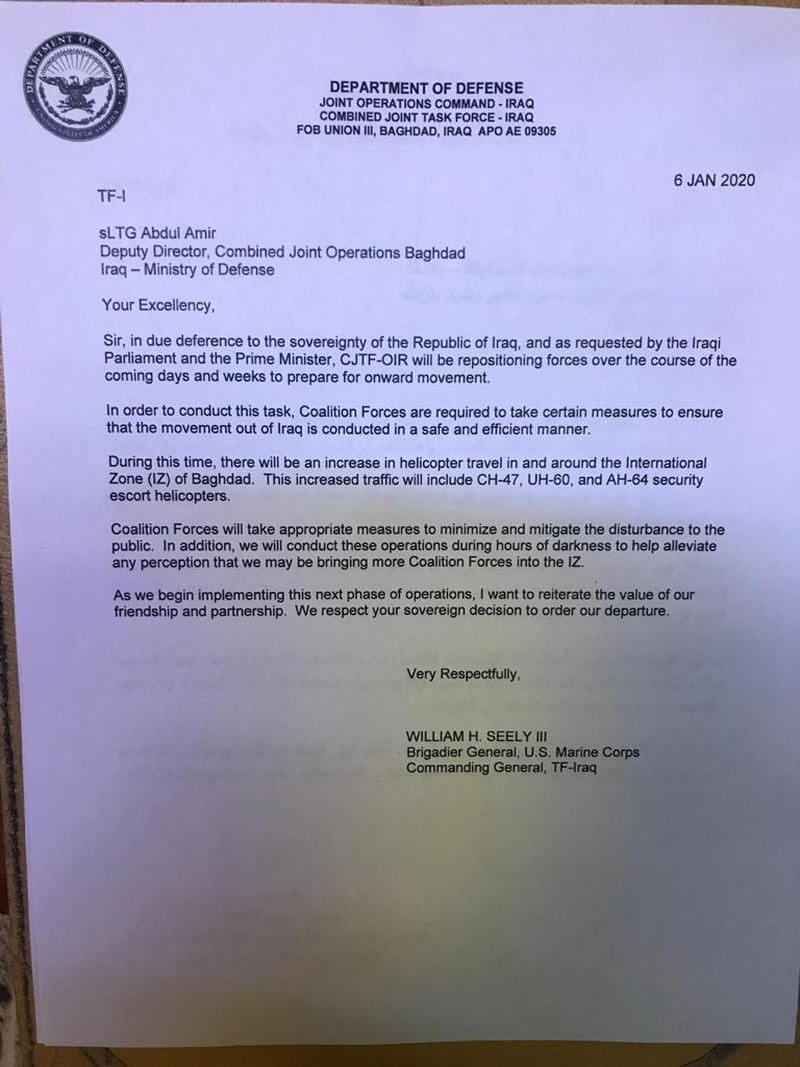 The letter reads as follows:

Sir, in due deference to the sovereignty of the Republic of Iraq, and as requested by the Iraqi Parliament and the Prime Minister, CJTF-OIR will be repositioning forces over the course of the coming days and weeks to prepare for onward movement.

In order to conduct this task, Coalition Forces are required to take certain measures to ensure Mat Me movement out of Iraq is conducted in a safe and efficient manner.

During this time, there will be an increase in helicopter travel in and around the International Zone (IZ) of Baghdad. This increased traffic will include CH47. VH-00, and AH-64 security escort helicopters.

Coalition Forces will take appropriate measures to minimize and miitgate the disturbance to the public. In addition, we will conduct these operations during hours of darkness to help alleviate any perception that we may be bringing more Coalition Forces into the IZ.

As we begin implementing this next phase of operations, I wish to reiterate the value of our friendship and partnership. We respect your sovereign decision to order our departure.

The welcome announcement comes as many in the media were convinced President Trump was about to start World War III following the targeted killing of Iran’s top general Qassam Soleimani last week.

The news will likely deeply disappoint the neocons in Washington who were eager to launch a new war.

Before the propaganda spin machine brainwashes America regarding President Trump’s bold move to attack the heads of the Iranian snake, Alex Jones looks at why he did what he did.

Also, take advantage of the final day of our Mega Blowout Sale with free shipping and up to 75% off our hottest items!