In the lead up to the 2017 general election, YouGov’s MRP projection model accurately predicted a hung parliament at a time when many other pollsters were indicating a Conservative majority. As Statista’s Martin Armstrong details, the MRP technique (Multilevel Regression and Post-stratification) is used to make estimates for small geographies for which only small sample sizes are available. Anthony Wells, Director of Political and Social Research at YouGov, explains:

“It works by using an extremely large number of interviews to model people’s voting preferences based upon their demographics and the local political circumstances. Once this model has been developed it is applied to the demographic make-up and political circumstances of each of the 632 constituencies in Great Britain, providing projected vote shares for each and every seat”.

As the infographic below shows, the projections for 2019 are a far cry from the hung parliament predicted for 2017. 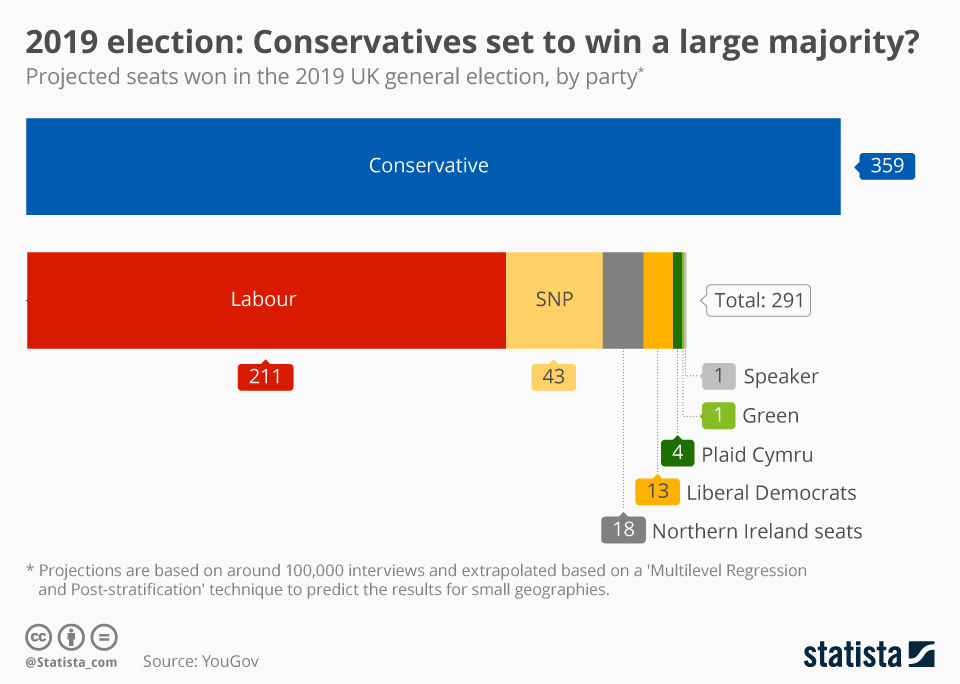 According to this year’s calculations, Boris Johnson’s Conservative party is set for a large parliamentary majority, taking 359 seats to Labour’s 211. That would represent an increase of 42 seats for the tories and a devastating decrease of 51 for Labour – surely prompting a change in party leadership.

In Scotland, the SNP is forecast to gain eight seats, taking five from Labour, two from the Conservatives and one from the Lib Dems. Speaking of the Liberal Democrats, Jo Swinson’s party is apparently also due for a disappointing election night, taking just 13 seats, representing a measly gain of one.

Get DNA Force 50% off and get a free bottle of Brain Force Plus now!