“After plastering “BLACK LIVES MATTER” in capitalized bold text across every loading screen and delaying the launch of Season 4 for a week seemingly failed to end racism on a global scale, it appears that Infinity Ward have removed the OK emote from the game,” reports National File.

The company didn’t publicly acknowledge the change, but numerous Twitter users noticed the deadly hand sign’s absence from the game.

@CallofDuty before the mid season update there was a gift pack released with the ok symbol i snatched this pack just for the ok symbol but now its been replaced with another emote called crush. I dont want crush. I want the okay symbol. Please respond id like to know why this is

Why was the ok emote removed

Someone also created a Reddit thread to discuss the issue, but in the spirit of one of if not the most censored social networks in existence, it was swiftly locked by moderators. 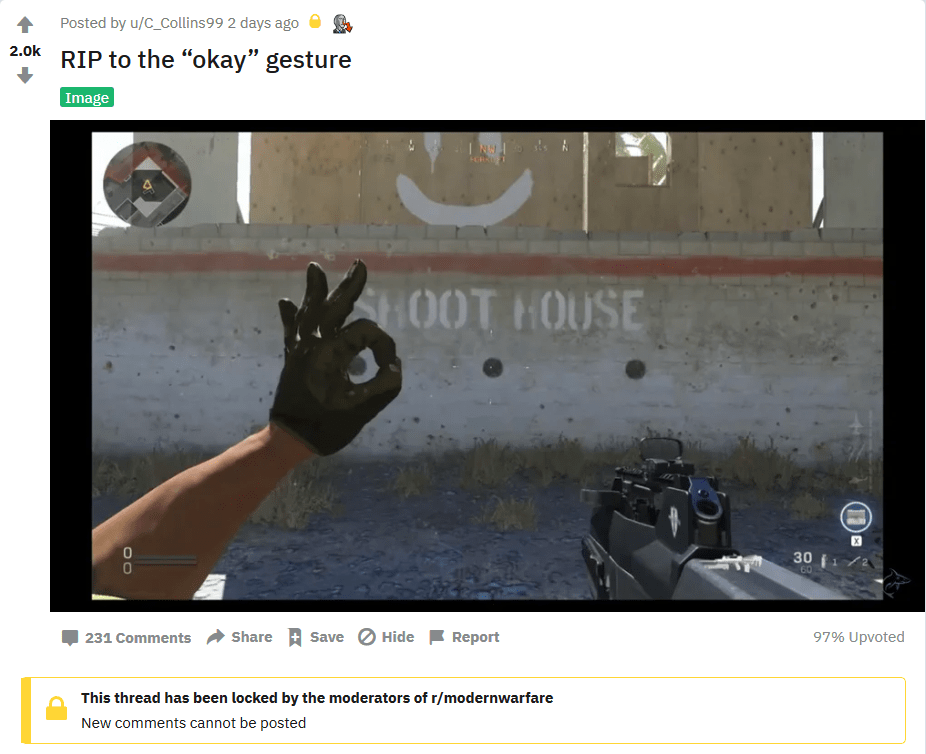 The notion that the ‘OK’ hand gesture is some kind of racist dog whistle originated as a stunt by 4chan trolls to fool the media into hysterically amplifying a hoax, which it dutifully has done for the past three years.

Although the ADL initially refused to take the bait, they later reversed their position and included the gesture in their “hate symbols” database.

“Some white supremacists themselves soon also participated in such trolling tactics, lending an actual credence to those who labeled the trolling gesture as racist in nature,” states the organization on its website. “By 2019, at least some white supremacists seem to have abandoned the ironic or satiric intent behind the original trolling campaign and used the symbol as a sincere expression of white supremacy.”

As we highlight in the video below, other companies that helped end racism include Lego for pulling marketing of toy police stations and Uncle Bens for erasing the character of an African-American man from their products.