A cameraman claims to have located an Antifa encampment where rioters are housed in Portland, Oregon.

In the video, the man highlights a large tent city located near Burnside Bridge barricaded behind fences, complete with port-a-potties and portable tents for shade.

Describing the area as a “war encampment,” the cameraman asserts the tent city is being funded by the City of Portland.

After about three minutes of filming, one of the campers uses a slingshot to fling objects at the cameraman, as seen in the following clip:

The fabled #AntifaHQ of Portland has been located. The war encampment that houses the #PortlandProtests and all of its demonic secrets are now laid bare to the world. The city is housing them and they have more toilets than The Chaz. Full video @YouTube https://t.co/zhNt2uBrpw pic.twitter.com/hfwmYimM3g

At the same time, a man walks up to his fellow comrade appearing to be an Antifa agitator arrested in recent clashes with Trump supporters, dubbed “Trumpet man.” 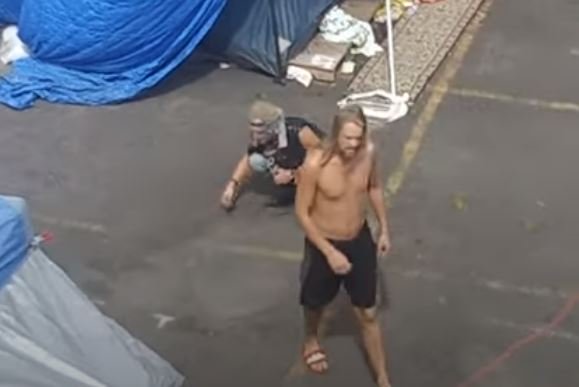 After being pelted with slingshots the person filming, whose channel is Never Alone with Christ on YouTube, claims he was chased by two people for about four of five blocks.

“I’m not filming General homeless individuals. This encampment is filled with young vibrant people who are actively, at night, committing crimes, and burning Portland to the ground,” he wrote in his YouTube description. “There is usually 2 large buses that are close by, school type buses, but they must have sent them somewhere. I’ve been in this area a couple few times this is the first time I filmed it…”