The unknown intelligence official who filed a formal and uncorroborated complaint against President Trump dealing with a phone call to Ukraine’s President Volodymyr Zelensky has brought on a legal team that includes a lawyer who once worked for Hillary Clinton and Sen. Chuck Schumer (D-N.Y.)

Andrew P. Bakaj, a former C.I.A. and Pentagon official whose legal practice specializes in whistle-blower and security clearance issues, confirmed that he is representing the official who filed the complaint.https://t.co/VgmVwVqwps

Andrew Bakaj, now a managing partner at the Compass Rose Legal Group, interned for Schumer in the spring of 2001 and for Clinton in the fall of the same year, according to Bakaj’s LinkedIn page. 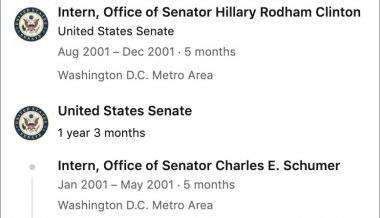 Additionally, Bakaj has worked as an official in the CIA and Pentagon, specializing in “whistleblower and security clearances.”

Bakaj’s anonymous client has filed complaint based on rumors accusing Trump of requesting that Ukraine President Volodymyr Zelensky investigate 2020 Democratic frontrunner and former Vice President Joe Biden and his son, Hunter, for their business dealings with a Ukrainian energy company.

The intelligence inspector general decided the complaint is “credible” and “urgent,” but officials at the Department of National Intelligence say otherwise due to the lack of evidence undergirding the complaint and have refused to release it to Congress. The anonymous whistleblower has also admitted to not having firsthand knowledge of the conversations between the president and Zelensky.

This revelation comes as House Speaker Nancy Pelosi announced her intention to bring an impeachment resolution to the floor on Wednesday, despite the fact no member of Congress has read the transcript of Trump’s phone call, which he said will also be released tomorrow.

“I’m in favor of moving toward impeachment,” Clinton told People. “I did not come to that decision easily or quickly, but this is an emergency as I see it.”

A confident President Trump derided questions from journalists over the whistleblower complaint suggesting the president made promises to Ukraine in exchange for a probe into former Vice President Joe Biden’s dealings with the country.