Several news agencies have opted to delete a story stating that 100,000 migrant children were detained in US border facilities after the United Nations clarified that the number is years old, predating the age of Trump.

After media outlets published stories trumpeting the 100,000 figure earlier this week, based on the word of UN refugee specialist Manfred Nowak, the expert was forced to correct his initial statement on Tuesday. As it turns out, the figure Nowak cited to reporters dates back to 2015, meaning the dramatic number of detentions he revealed occurred under the watch of President Barack Obama, rather than Donald Trump, who is often assailed by progressive critics over his border policies.

Instead of issuing corrections, however, Nowak’s clarification prompted several outlets to withdraw their stories altogether, including Reuters and AFP, who both said no replacement story would be forthcoming.

AFP is withdrawing this story.

We will delete the story. https://t.co/p30UjEWl7u

At the time of publishing, AFP’s version of the story containing the outdated figure was still live on its website. 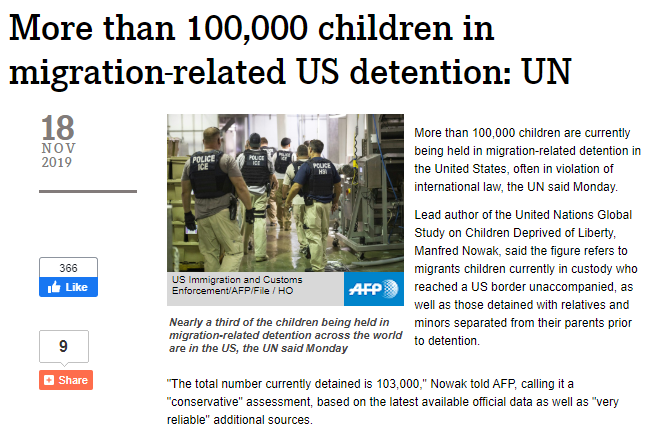 Once responsibility for the vast number of detentions was passed from Trump to Obama, however, Nowak decided to clarify further that the 100,000 figure referred to the cumulative number of migrant children detained at any point in 2015, rather than all at one time, another caveat he apparently forgot to explain to reporters previously.

David Knight joins The Alex Jones Show to break down the federal ruling that upheld the illegal sale of fetal tissue.
The Black Friday sales have arrived early! Get up to 70% off our hottest products as well as free-shipping and double Patriot Points while the sale lasts!

Despite frequent and vocal criticisms of President Trump’s border policies, his predecessor’s approach to immigration was not entirely different, even earning Obama the moniker of “Deporter in Chief.” During his first term, President Obama deported some 400,000 migrants each year, setting a record for himself in 2012 at over 409,000. President Trump, meanwhile, has deported fewer than 300,000 each year since taking office in 2017.

A widely-circulated photo showing migrant children locked in a cage is also often attributed to President Trump’s policies, but just like the figure presented by Nowak, it also dates back to the Obama years.

A handful of netizens took notice of the abrupt reversal by the news agencies, some critical of the move to outright scrub the offending articles, rather than simply correcting them to reflect the facts.

“The appropriate action would be to correct the story and issue a retraction, not delete it,” one user suggested. “The fact that this self proclaimed ‘news agency’ is going to bury news because it didn’t fit the narrative they’ve been tasked with dispensing encapsulates everything wrong with the press.”

I mean Obama Put Over One Hundred Thousand Children Into Detention Camps, Cages, And Dog Kennels seems a newsworthy headline, since the press still hasn’t meaningfully addressed the fact that @BarackObama actually did that, but sure, delete the article as if it was never written.

LOL. Wait? Did Trump lock up these children while Obama was president? Diabolical. Did Putin help him do that? https://t.co/JglE4ViCiv