Having started on Monday, the US Army continues its war drills across the greater Los Angeles metropolitan area through Saturday with the goal of enhancing Army Special Forces skills by “operating in urban environments”, Army Special Operations Command said in a statement. 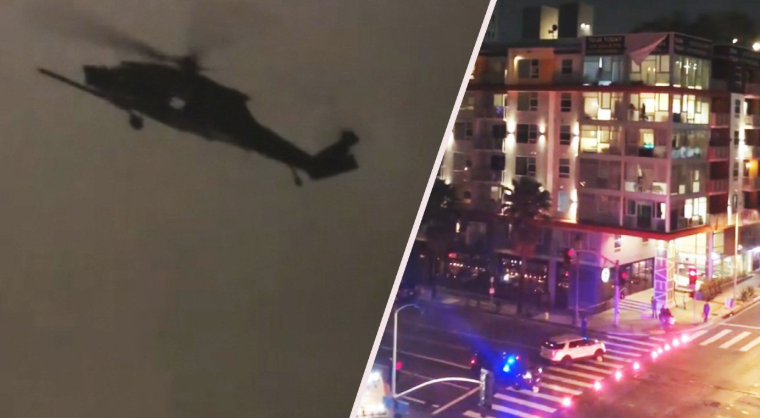 Residents around Los Angeles may hear sounds associated with the field training exercise, including helicopters and weapon simulations, according to the statement.

“The local terrain and training facilities in Los Angeles provide the Army with unique locations and simulates urban environments the service members may encounter when deployed overseas,” the Army told CBS.

Downtown Los Angeles residents were shocked Monday night when a fleet of Boeing A/MH-6M Little Bird and Sikorsky UH-60 Black Hawk helicopters swooped in around them.

👀WTF is going on in downtown Los Angeles??? 👀 Multiple military helicopters landing on the street!!!#QAnon pic.twitter.com/jlUmBkfPRb

A commercial parking lot across the street from the Regal Cinemas L.A. LIVE 14, at 1000 W Olympic Blvd, was the epicenter of some intense war simulations Tuesday night.

Newchopper4 Bravo was overhead as Special Forces performed training exercises in the parking lot, then were extracted by helicopters before taking off over the 110 Freeway while police blocked nearby intersections.

Not every day that you see the @USArmy training in downtown LA and landing helicopters close to @STAPLESCenter and LA Live. https://t.co/mXi8qNpgKn pic.twitter.com/b7HvhwjO3V

There were other field training exercises that were on the perimeter of the city, away from populated areas and toward the San Pedro Bay port Tuesday night and into early Wednesday morning.

An FBI agent used duct tape to cover up surveillance cameras at during the raid on Roger Stone. See for yourself this deep state tactic and possible criminal action.

The Army leased space in an industrially zoned area around the Port of Los Angeles near Terminal Island for field training exercises Wednesday night, according to Phillip Sanfield, a spokesman for the L.A. port. Port operations at Long Beach, the second largest port in the US, were not affected, port spokesman Lee Peterson told the Los Angeles Times.

Sanfield said residents living on houseboats in marinas around Wilmington were notified they might hear helicopters, explosions, and simulated assault rifle fire.

“There is no replacement for realistic training. Each location selected enables special operations teams and flight crews to maintain maximum readiness and proficiency, validate equipment and exercise standard safety procedures. The training is essential to ensure service members are fully trained and prepared to defend our nation overseas.”

“It wouldn’t be unheard of to train in Boston or Miami,” he said.

“It takes a lot of planning and coordination to do this safely.”

This is not the first time residents of a major metropolitan area across the US have experienced a military exercise. For instance, in 2015, Texas residents prepared for Jade Helm 15, an army training exercise which took place in multiple states.