YouTuber Ethan Klein, who previously said that cancel culture was a good thing, complained about losing all of his sponsors after being targeted by a cancel culture mob over alleged “homophobic” remarks.

You reap what you sow.

Earlier this year, Klein announced he was deleting his previous interviews with author Jordan Peterson over the Canadian academic being a “dangerous gateway to the alt-right, transphobia, and covid misinfo.”

Peterson responded by warning Klein that “those who engage in cancel culture generally live to regret it,” adding, “the chickens will definitely come home to roost.”

“You will be held to higher and higher and soon impossible to maintain ethical standards by the very mob you currently wish to please,” said Peterson.

“Then you will make a mistake, and they will devour you. With glee. Please take this warning seriously. I liked you,” he added.

Klein responded by asserting that being cancelled can sometimes be “a good experience.” 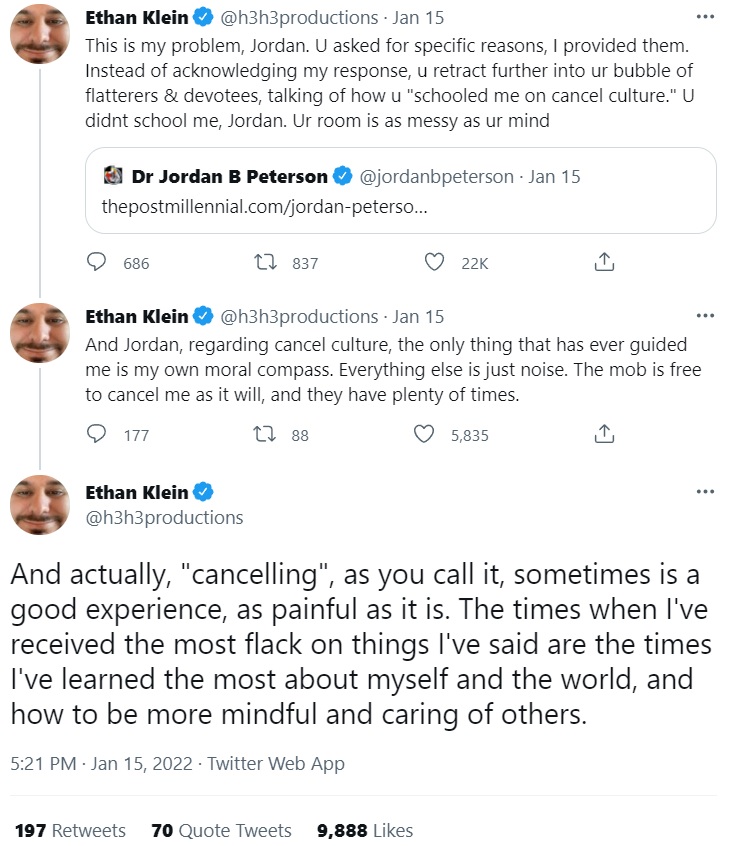 After a clip of Klein making comments about gay people, deemed “homophobic” by the ever-sensitive alphabet people, went viral, the YouTuber lost all his sponsors.

During his show earlier this week, Klein complained, “Today we have no sponsors because…our wonderful fans have taken it upon themselves to write all our sponsors and to have them can(cel), not to support us.”

Klein appeared to be cautious about using the word “cancel.”

The YouTuber went on to explain how it was “painful that people would do that.”

“It’s kind of crazy that they just drop you like a bag of dirt over some bullshit,” said Klein, referring to the sponsors who cancelled on him.

Looks like Ethan Klein didn’t listen to @jordanbpeterson’s warning about cancel culture. You reap what you sow. pic.twitter.com/g4NOBQxEcA

After having initially opposed ‘woke’ snowflakes in a series of videos several years ago, Klein reversed course and became a creature of the establishment after meeting YouTube CEO Susan Wojcicki.

He has repeatedly called for other people to be deplatformed and cancelled over ‘controversial’ remarks, so the fact that it’s now happening to him isn’t without irony.